Scene 6. The Witch of the Wood 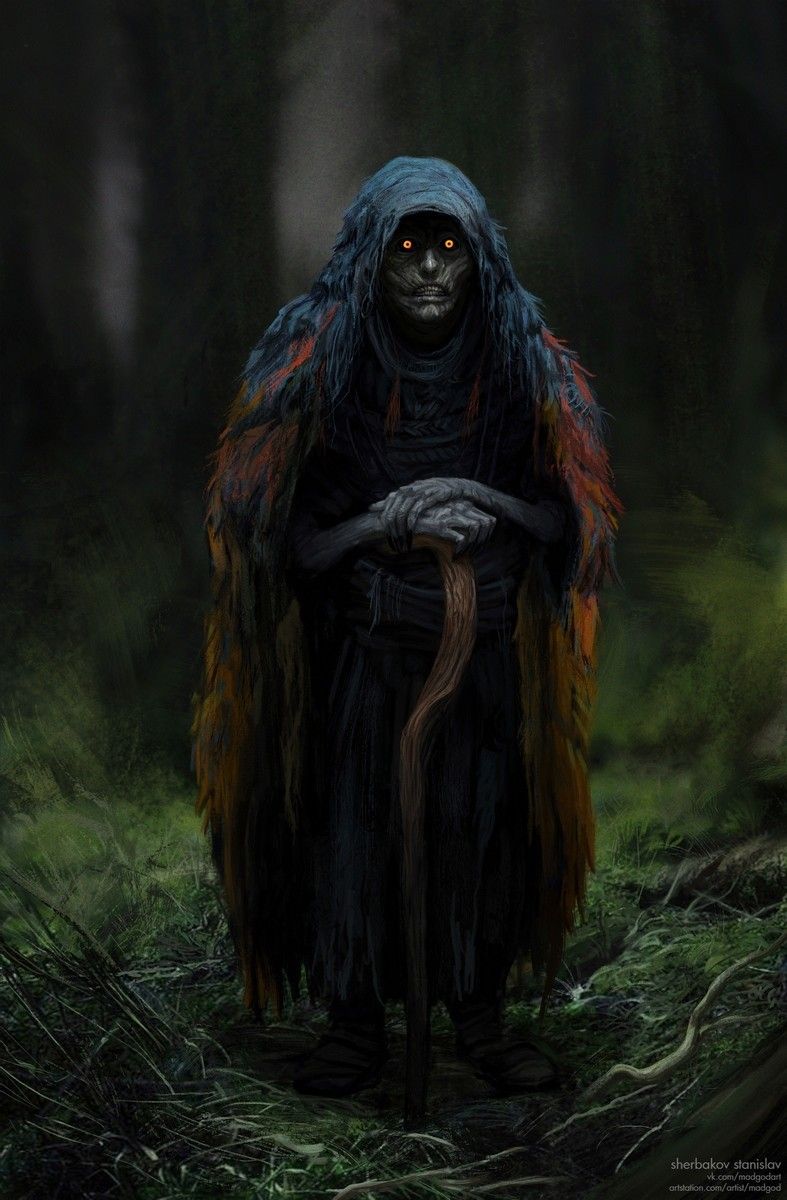 Another derailment? Let’s see… I’m going to roll a few Cubes to distill the meaning, and I get Chalice, Fearful Face, and Quill. Sounds like they run into surviving members of the camp who have with them the healer.

The night deepened as Janson and Amelia plodded through the woods. Amelia did her best to trailblaze and keep a lookout for trouble. Janson bore his cousin stoically over his shoulder.

When they heard sounds ahead, the two came to a halt and crouched quietly. There was torchlight and anxious voices. Janson recognized some of the men and yelled to attract their attention. Soon, the pair were surrounded by fierce men wielding bows and spears. Janson held up his hands to placate them.

“It is Janson Morn, along with Randall!”

“…And a friend!” Amelia added.

The men were rebels, including a number of reinforcements from nearby farms. Among them an old crone stepped forward. She was withered and repulsive — she was blind, finding her way with a crooked walking stick and the help of two other men.

“Malda!” Amelia said under her breath in astonishment.

Janson turned to question how she knew the old crone of the woods, but he was overcome by cheers of his relieved colleagues. The men crowded in, bombarding him with a dozen questions and helping place poor Randall on the turf near a tree.

Amelia withdrew, horrified by the woman.

I’m compelling (by choice) Amelia’s A STRING OF POWERFUL ENEMIES. She has 4 fate points.

Malda Tel’fyr was a phantom out of Amelia’s distant past. The novice Harper had run across her before. Malda was some sort of witch, an authority of the occult, and perhaps even devoted to some dark goddess. She had helped one of the slave lords working in Waterdeep with his evil work. As far as Amelia knew, Malda had been apprehended like may of the other villains by the lords there when they were taken down. How she had escaped, and what she was doing so far from Waterdeep in the Dales begged questions of the Harper.

As the men rejoiced that their lord was alive, Malda’s repugnant face turned in Amelia’s direction, probing the air suspiciously with her bulbous nose toward Janson’s friend. Amelia shrank into the shadows.

“Malda!” Janson cried. “My cousin was wounded in battle. He has lost blood. Can you help him?”

The woman felt her way toward the prone man who clung tenuously to life. Her gnarled fingers found their way to the wound in his chest and felt for signs of life.

“We haven’t much time,” Malda croaked.

The old woman removed some sort of foul-smelling poultice from her neck. She chanted and seemed to shrink over Randall’s form, nearly collapsing atop him. At last, she righted herself. “He needs rest,” she said in a spent voice. “We must bring him to my cottage immediately,” she urged.

In agreement, the men helped bear their fallen leader after Malda. Many of the men parted with them and continued back to the ambush site to find more survivors or oust other evil lurkers. As they continued, Janson questioned his companions as to the happenings when they were attacked.

Q. Do they know who the drow work for? (No Way) No
Q. What do they know? Monkey, Treasure Map, Mushroom

None of the rebels knew the reason for the attack. They were completely taken by surprise as dark elves descended upon the camp silently from the trees. The initial wave decimated many men. However, the force was not large and the survivors eventually routed them. They followed the fleeing attackers to a cavern not far to the north that was filled with giant mushrooms. They dared not enter for fear of great numbers and prepared tactics, but at least tracked the place from which they issued.

They then immediately went to get reinforcements and summon Malda, the witch of the wood, to heal any survivors.

Before they arrived at Malda’s place, Janson looked back to Amelia, who had fallen behind. He waited for her. “What is wrong?”

Amelia didn’t speak at first. When she did, she kept her voice low. “How do you know that woman?” her voice was full of dread. She remembered seeing some horrific things in Malda’s presence in the past.

“She is sympathetic to our cause,” Janson replied. “Or at least willing to give assistance when we are in need of it.”

“You shouldn’t trust her,” Amelia warned.

Janson looked down at the Harper with sternness. “She has saved many men. We owe her our gratitude!”

Amelia was about to reply, but kept her mouth shut. She would watch the witch carefully. For all she knew, Malda might try to slit her throat when she slept for retribution.

Chaos factor goes down a point to 7.