We who play rpg’s solo get a chance to kick the tires of many systems, play with concepts, settings, or ideas in a way that we often wouldn’t with other groups. During our playtime, we discover things that don’t work, and sometimes stumble upon things that facilitate our lonely fun time.

I’ve heard it discussed numerously among soloists that Fate is one of those games that just don’t work very well (or at all) in a solo environment. Many of us wish it would, and I’ve made a half dozen or so halfhearted attempts. It’s just too much a collaborative system to be able to do it alone, among other issues.

However, I’m still convinced it can work...and I’ve picked up my old Drowsbane campaign to give an honest go of it.

In this first post, I’m discussing my approach, tools, and setup. I like things minimalist, so I’m letting Fate do most of the work for me. It already has its built-in Mythic-like plot builder in the form of aspects. However, I’m supplementing it with Rory’s Story Cubes and making sure I am using note cards. 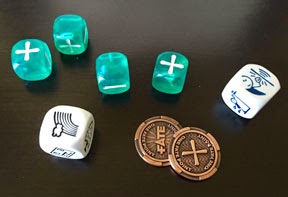 Believe it or not, there’s not a whole lot that Fate needs. I decided that if I get stuck, I can ask a yes/no question, always with 50% odds. I happen to be flipping one of my pretty copper Fate coins from Campaign Coins to determine results. Heads = “yes”. More commonly, I’m using Rory’s Story Cubes to generate some details by answering more open questions like, “What’s this guy like? What kind of talents does he have?” and so on.

Aspects is really where it’s at. I have been putting all my game aspects and important character aspects on note cards. Aspects tell us almost everything about a game of Fate. It’s already there to provide inspiration about what level of opposition to set, it’s there to provide options for compels, and the compel is the key to turning Fate into its own potent adventure/plot designer.

The most common question I have been asking during scenes is one at the start...unless there’s reason not to (such as there’s already too many fires to put out from other scenes). I ask, “Does this scene begin with a compel?”. If needed, I might clarify whether the aspect in question is a character aspect, a decision-based or event-based compel, or one of the campaign-level aspects. Once this is known, I take my cards and sort them into a stack. Shuffle, draw an aspect, and roll some Story Cubes as to how that aspect manifests into a relevant compel, and...

Instant event created. Now, it’s a simple matter of setting up the opposition in such a way that makes sense. Keeping in mind that characters face minor challenges along the way, and not every baddie needs to be at Main NPC level.


I decided to use Fate Accelerated as by baseline. The one decision I had to make was how magic was going to work, since I am doing standard D&D fantasy. I have the Fate Freeport Companion, but I prefer the more creative standard FAE Approaches to the standard six Skills (Strength, Dexterity, etc.), so that was out.

One of my favorite options for magic is one found under the Channeling option on page 131 of the Fate System Toolkit. Power is built through a Create an Advantage action to put some sort of flavored power aspect into play. I decided Carefully will be the standard Approach for this to occur. I also decided to use a spell list approach. Characters can start play with Careful +1 spells. Each spell is an aspect in and of itself, so it can be invoked or compelled when used. Characters can try to learn new ones through play. If casters want to get spells off quickly (using, well... Quickly!) in one action, they risk taking stress if they miss a higher threshold to cast (and open options for success at a cost).

Stunts can define schools of magic, specialties, or areas granting access to all flavored magic without the need to learn individual spells as discussed above. Area-affecting spells always work through splitting shifts, according to the rules in Core, but characters can also cast at a “declared level” to up their shifts, as well as use free invocations of their power-generated aspects.

Gear is listed, granting and denying permissions and establishing facts like aspects, but without the mechanical benefits of aspects (invocations & compels). Unique plot-point gear can be treated like regular aspects, but will be encountered rarely.


Game setup as per Core’s rules is the key to getting the Fate engine working for solo play. To do this, I’ve picked up my Drowsbane Campaign, which has been on hiatus since the summer of 2014. I got stalled in that one, getting some burnout just before tying up all the loose ends in the Hour of Dream.


Tengrym, our main protagonist, and Thedric, his half-brother sidekick, successfully tracked Shandorin, our main baddie so far, to Scardale in the Forgotten Realms. It was uncovered that the plot was to lace the deadly grains (enchanted with a potent slumber magic) among normal ones in the port. Scardale is one of the main hubs of trade in the Dales, so eventually, poisoned grain could travel in any of the four directions by land or sea. It appeared that the grain was then to be loaded onto ships and exported to unknown targets. Thedric successfully enlisted the local garrisons to help root out the evil while Tengrym sought his enemy, and a great confrontation took place in the port.

Tengrym confronted Shandorin, and a battle took place. With the help of Dynas Dundragon, an exiled court wizard of the Drowsbane court and now rival, Tengrym captures the evenly matched Shandorin.

In Scarsdale, Tengrym also has a chance encounter with Arafraulyn, his former fencing master, general of the Sulaspryn militia, and confidant of Tengrym’s late father...an elf he did not know still lived. Tengrym and Thedric rescued him from the clutches of an ill-tempered ogre (do ogres ever come in any other variety?).


The aftermath of the story arc is as follows:


Using the advice in Core, I tried coming up with some story questions that might help direct the actions of our hero.


With those things worked out so far, I used the standard game creation method found in Core to summarize the sorts of issues, faces and places that have already been in play from my previous sessions from long ago. It gives plenty with which to work. 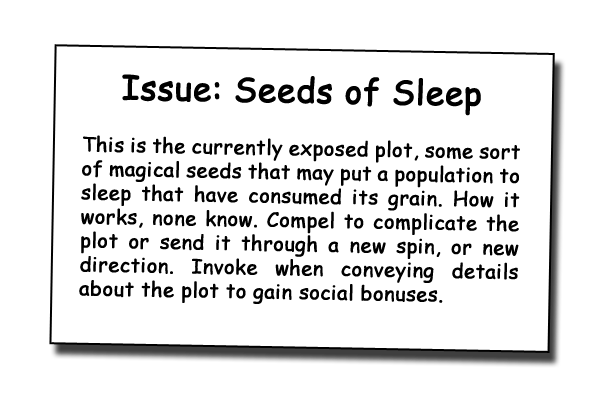 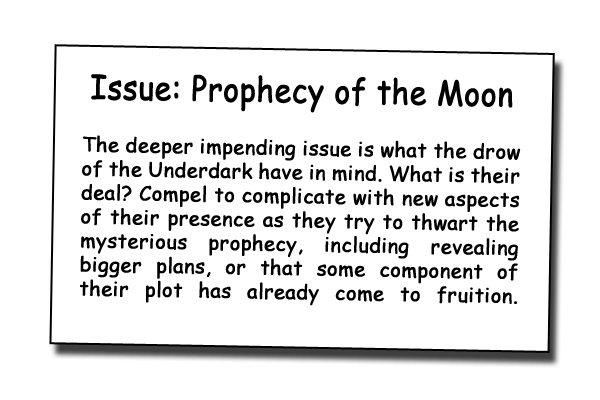 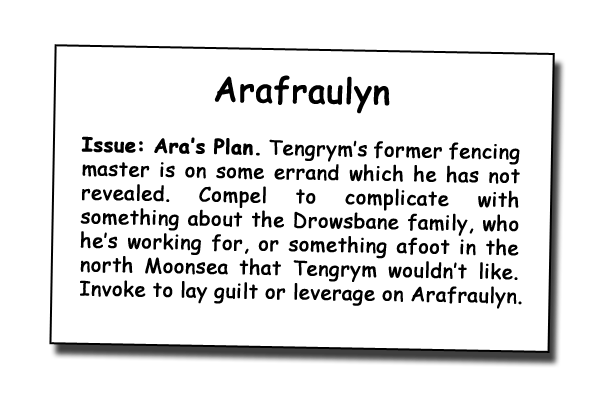 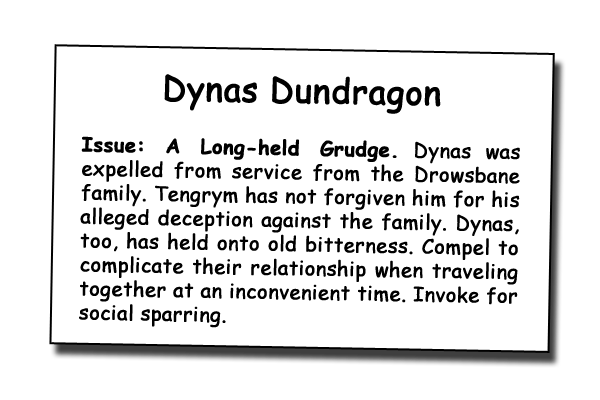 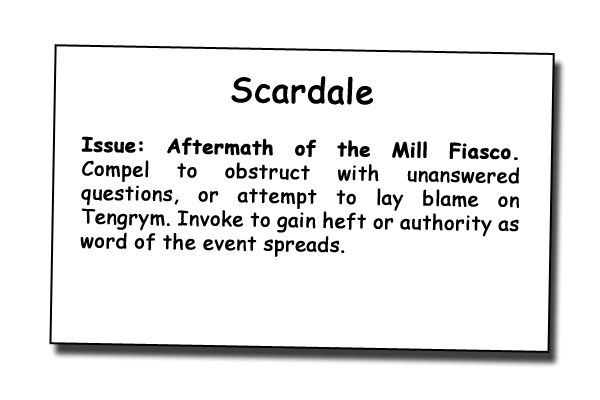 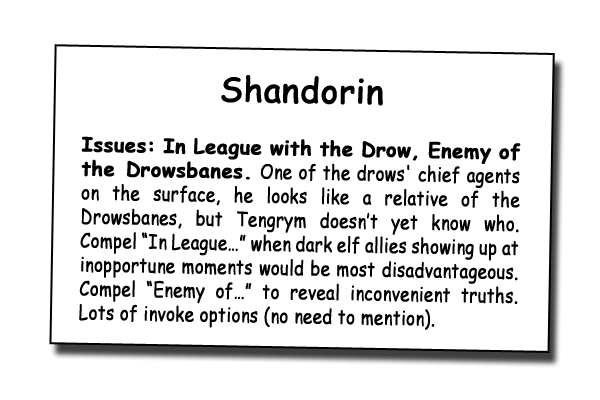 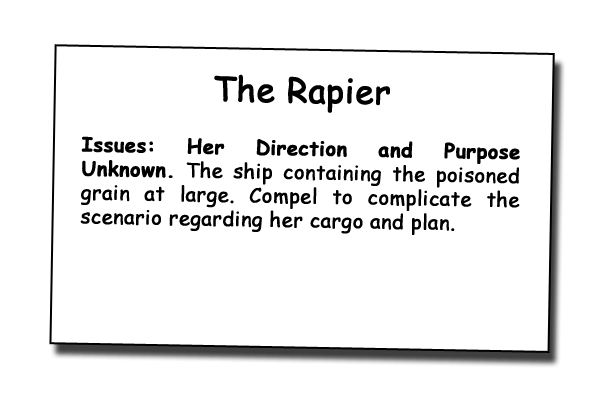 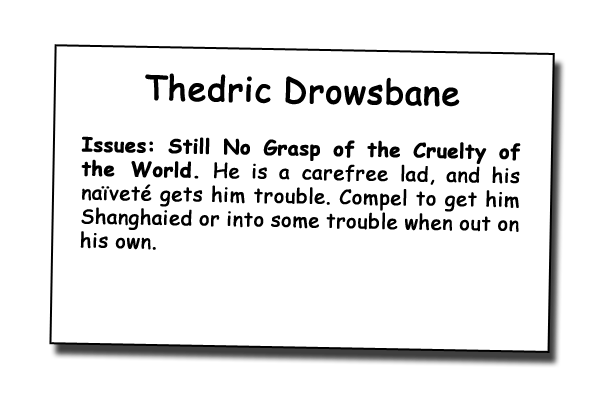 In addition, many of the NPCs have a few more interesting aspects that I’ve put on their own cards that offer more compel options. Each aspect that’s interesting for plot purposes gets its own card.

Ara’s Lessons. +2 to Cleverly create an advantage actions when observing weaknesses in an opponent’s style when dueling one on one.
Danger Sense. You have an almost preternatural capacity for detecting danger. You may Quickly notice things unimpeded by conditions like total concealment, darkness, or other sensory impairments in situations where someone or something intends to harm you.
Quick Learner. +2 to Quickly overcome actions when learning new grimoire or arcana, even if exposure was brief.
Power of Deduction. Once per scene you can spend a fate point (and a few minutes of observation) to Quickly overcome representing your potent deductive faculties. For each shift you make on this roll you discover or create an aspect, on either the scene or the target of your observations, though you may only invoke one of them for free.

In my next post, I’ll give details of the first session of play, using aspects as the main driver for creating story with the aid of some Story Cubes and the flip of a coin.
Posted by Rory Bracebuckle at 10:34 AM