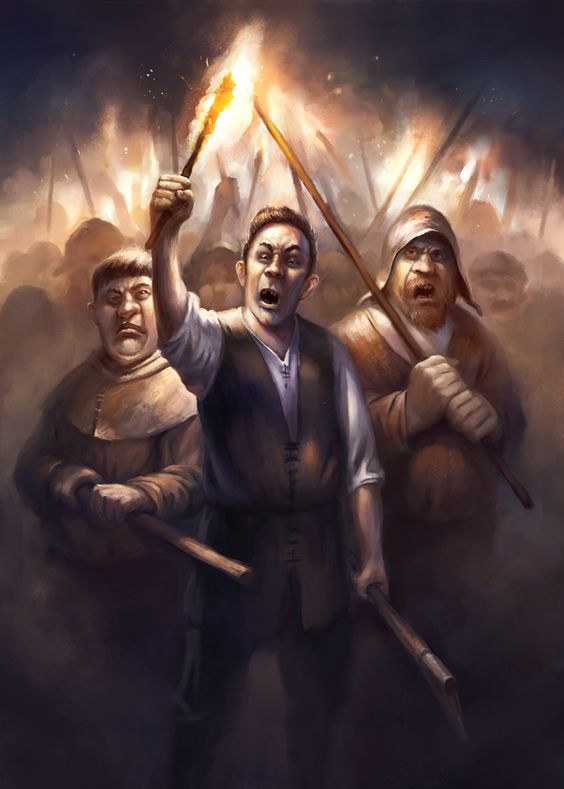 I’m assuming word gets out that Tren has imprisoned a visiting wizard.
Q. Do the townsfolk inquire if she can lift their curse? (50/50) Yes
Q. What is Tren’s response? Worried, Masks, Menacing Shadow

Constable Tren was still in a fit the next day. How the woman had gotten under his skin! The contemptible authoritarian sat at his desk when one of his toothless cronies came in the door with a worried face.

“My lord,” the man said sheepishly. “You need to come — the townsfolk are demanding answers.”

“What?! I don’t have time for… Oh, just let me see what this foolishness is about!”

Tren got up from his seat and walked outside. Standing outside of the town’s hall stood a multitude of folk, including some of the more noteworthy shopkeepers and even some of the local watch.

“Noemfor!” cried Fendil, the town blacksmith “We have heard you arrested a wizard!”

Tren scanned their faces. Although he was contemptible, he was clever, and a capable speaker. He had to wear many faces to keep order in a town with little enough of it. Clearing his throat, he answered, “Good townsfolk of Dagger Falls, master Fendil speaks truthfully. Last night, a sorceress of no uncertain power tried to assail your good constable without provocation.”

An indignant hrumph resounded somewhere among the gathered. Tren decided to ignore the disdain. “We had no choice but to imprison the attacker. Rest assured, she will be examined by the magistrate and justice will prevail! Your town is safe.”

“That’s not what Fendil was getting at,” shouted another voice. “Maybe this wizard can be made to lift the curse!”

“My sister succumbed to the dream fever last night!” cried another, followed by many others.

Tren held up his hand to stay them. “Peace! Peace! This villain assailed me yesterday by surprise. This wizard is dastardly. A villain, I say! How could you trust one so vile to loosen her sorceries on this already stricken town. She could make such problems worse still!”

This went on for some time, and Tren eventually assuaged their curiosity and concerns, telling them every resource was being spent to find a capable healer or priest who could lift the curse. There were also calls to find Eragyn, the priestess of Cyric that had disappeared. Many shouted their belief that she was behind the debacle and should be hunted.

When at last Tren retired, sweaty and perturbed, a lone figure awaited in his office.

Q. Who is this character? Beetle, Question Mark, Tree

Tren started at the abrupt appearance of a cloaked dark elf. “This woman,” the drow said without preamble. “You were careless to make a spectacle with your mouth. Now the people know and will question the narrative. Do away with her.” The drow’s last statement was hard like a do it or else threat. Tren knew little enough about his messenger contact, but knew enough not to question him. “She must be gone by tomorrow. You do not want to see me again in your office. Make sure it is so.”

The dark elf abruptly vanished without awaiting a reply from the now petrified Tren. When at last he recovered, he made a plan. The sorceress would have to go in the night during the curfew when no one would witness her removal.

Mostly a scene for color and plot building. I think we’re off the rails already.
The Chaos Factor goes up by 1.

I'm clearly off the rails entirely by this point, but I'm looking forward to seeing how Shoshana gets out of this, and how Amelia and Janson meet up with her.
Posted by Rory Bracebuckle at 11:18 PM