continued from here. Note, I've made a couple minor changes to the starting characters' peak skills. 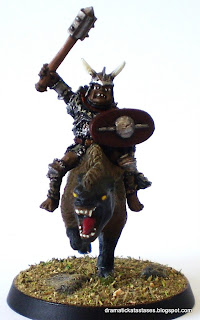 Setup. Amelia arrives at the outskirts of Dagger Falls


Threads. Solve the Trouble of Daggerdale

Amelia Destaroon was road-weary and dirty from her long travel. The worn dirt track cut across the wooded dale that was crisp with the colder turn of the season. The colors of autumn might have been beautiful had it not been for the bleak emptiness of a forlorn landscape marked by the suffering of an oppressed people. Fields were stricken by blight, and most farmsteads were empty, their families long since seeking fortune elsewhere.

Amelia’s handler had told her to seek out Randall Morn, and through him learn something of the malady that had hit the Zhentarim protectorate. The young Harper bounced along, a singular slight young woman with bouncing black curls under her heavy sodden hood. A short blade hung at her side and a light pack strapped to her shoulders sagged — depleted from the end of a long journey.

Suddenly, howls broke the stillness. Ahead of her was the long ribbon of some watercourse, and far to the north, a bridge crossed. Behind her, four riders — goblins they appeared to be on the backs of massive wolves — cackled with glee and bore down upon the girl. She broke into a sprint to make the bridge with no other clear course. What safety she might find at the bridge, the young woman knew not. But she pressed on in a great panic.

Going to treat this as a contest. I’m assuming the riders have Ride (replaces Drive) at Average (+1). These will be Average (+1) nameless NPCs. I’ll also give them the aspect, MOUNTED ON WARGS with a free invocation.
Turn 1 — I’m giving Amelia a Fair (+2) rank in Athletics. She gets a Good (+3) result. The riders can use teamwork for a total of +4 to the roll. They get a Superb (+5) result for a Victory Point.

Amelia’s lungs burned as she pumped forward, pushing her sore body to its limits. Behind her, she could hear the snarls of the approaching group of raiders as they closed in dangerously behind her.

Turn 2 — Amelia rolls an Average (+1) against the goblins’ Fantastic (+6). They get two more Victory Points to win.

Nearly tripping, the bridge came within view, but snapping jaws of a massive wolf nipped at her as one rider tore past her. She was surrounded.

The pack encircled the shaking Harper. Amelia drew her short blade and turned in place, keeping its warding point out to keep them at bay. The cackling goblins cursed and taunted. Each had an axe in hand. Their wicked eyes were filled with mischief and evil delight.

Suddenly, a rustic-looking man with a sword at his side and a bow across his back appeared out of nowhere. He was grim with an unpleasant mien — unwholesome like an outlaw. A full beard lined his scowl and taut muscles hardened his bulky frame and broad shoulders.

“Have you resorted to easy sport now?” he challenged the goblins.

“Who said anything about easy?!” the girl shot back hotly. The man was not prepared for a retort from the girl. However, the riders broke their circle as they sized up the newcomer. The man slid his sword from its scabbard.

“Sorry,” he responded curtly, never taking his eyes off the enemy. “What say you to proving your claim?”

Amelia smiled, and the two launched into action.

Here’s a brief conflict. These are nothing more than GOBLIN PAWNS, each with an Average (+1) rank in Fight and Ride, and no stress boxes. Each has still MOUNTED ON WARGS with a free invoke. I’ll assign ranks in Notice to the PCs to give them priority. Amelia has Fair (+2), and Janson has Average (+1).
Amelia goes first, feigning an opening, and getting a Superb (+5) against their Poor (-1). This places LULLED INTO A SENSE OF SUPERIORITY with 2 free invokes.
Amelia’s two opponents attack, getting a +0 (Fight) against her +2 (Athletics). However, the goblins spend both of their free invokes, plus 1 GM Fate Point to up their result to Fantastic (+6). Amelia has no rank in Physique, and fills her 2-stress box and spends one of her two invokes to increase her Defend to Great (+4). The GM has 1 Fate Point remaining.

Two riders turned on the slight traveler as she bounded forward unexpectedly. However, coming face to face with the attackers’ snarling, snapping wolf mounts, she blanched and fell back. The two saw their opening against the seemingly overwhelmed girl and launched a series of wild hacks. Amelia rolled underneath, nearly getting trampled.

Janson goes next, attempting to overcome the riders’ MOUNTED ON WARGS advantages with his Physique. He gets a Superb (+5) against their Fair (+2). They spend both free invokes to get a Fantastic (+6) result, keeping their aspects in play.
They attack next, getting an Average (+0) result. Janson will have Fight at Good (+3), and gets a Great (+4) result, gaining a boost.

The remaining two positioned themselves as a bulwark against the taller foe, forming a line. The man strode forward unperturbed and yanked at the beasts’ reins with his offhand, nearly tearing out their tack and dumping their stupefied riders. The goblins somehow managed to break the hold and recover, hacking away wildly. The man easily deflected their hasty blows, leaving them momentarily off kilter on their unruly steeds.

From this point forward, I’ll summarize rolls briefer.
Amelia has Fight at Fair (+2). She attacks, but they get 4 shifts on their Defend.
She uses her last free invoke to re-roll doing only 1 better.
She declares a new stunt, Dirty Tricks. Gain +2 to attack with Fight the first time you’ve deceived an opponent into thinking they have the better position in combat. That gives her 2 more, and a Fate Point on LULLED gives her 1 shift, taking out one rider. She has 2 Fate Points remaining.
The remaining rider attacks, missing. Amelia gets a boost.

Amelia came up the opposite side of the riders. Her fearful look was now a mask bearing a fierce smile, letting the goblins know she wasn’t at all dismayed or backing down. One tried to back away when it realized the ruse, but it was too late. One dead goblin rolled off its wolf, hanging by one foot from the stirrups and sending the wolf off in a craze. The other rider hastily swung, but abruptly aborted the poor attack in favor of hanging on.

Janson attacks, taking out both.

The woodman had the advantage he needed and quickly slew his foes with powerful slices and deft thrusts. Bloody heaps lay at his feet.

The remaining goblin concedes. The heroes ultimately want him not to warn others. He surrenders, convincing them that he won’t — at least for now.

Amelia rounded his opponent ready to end his life. The goblin squeaked, tossing away its axe in surrender. After promising he wouldn’t tell anyone of the encounter, they two let the goblin go after slaying its mount. The goblin fled for the hills.

After watching him go and hiding the bodies in a ravine bed off the main way, the man returned to Amelia. “You’re not too bad with your blade, girl,” he noted.

“Better than you with your tongue!” she responded. “But thank you. You couldn’t have shown up at a better time.”

“Morn,” he introduced with an extended leathery hand.

“Janson — his cousin,” he corrected.

Amelia revealed her purpose to meet Lord Morn and to discover the source of Daggerdale’s current predicament. Janson listened to her, nodding all the while. “I won’t lie. My cousin would be most happy for your help — but if you think you can stop a plague, oust the Zhents and reverse the curse that spells Daggerdale’s doom, you’re chasing a dream.”

Amelia looked hard at the man. “Nonetheless, I’d be more in your debt if you’d arrange for a meeting, all foolishness aside.”

Janson gave her a look. “He doesn’t accept strangers on a whim,” he pronounced at last.

At last, the Harper won out. Janson nodded in final ascent.

When they began toward Randall’s current camp of rebels, Amelia asked about the goblins. Janson merely shrugged his big shoulders. “I couldn’t tell you. Even Constable Tren would never consider paying goblins to harass travelers or Dalesfolk. But even he’s not so high and mighty. He ultimately answers to Zhentil Keep. And I could see them behind something like this.”

After running this scene, I’m updating the two characters involved:

A slight dark-haired beauty with a penchant for intrigue and deception.

Dirty Tricks. Gain +2 to attack with Fight the first time you’ve deceived an opponent into thinking they have the better position in combat.

A cousin of Lord Randall, Janson is a roguish outlaw ready at any time to let fists fly at the usurpers of his native land.

I’ll continue filling them in as I go. Also note that the GM’s Fate Point pool goes up by 1 for the next scene due to the concession.

The Chaos Factor goes up by 1.

Already from the get-go, I'm kind of off the rails due to the “random” encounter I generated through Story Cubes. We’ll see where this leads. I still have to introduce the next character. I’m wondering if I’ll introduce her someone completely different, or in the next scene, assuming Amelia and Janson succeed in meeting up with Randall Morn. If I introduce her somewhere else, I may see if two directions eventually link up later.

I’ll ponder. Until next time…
Posted by Rory Bracebuckle at 6:59 PM