Scene 4. Ambush at the Rebel Camp 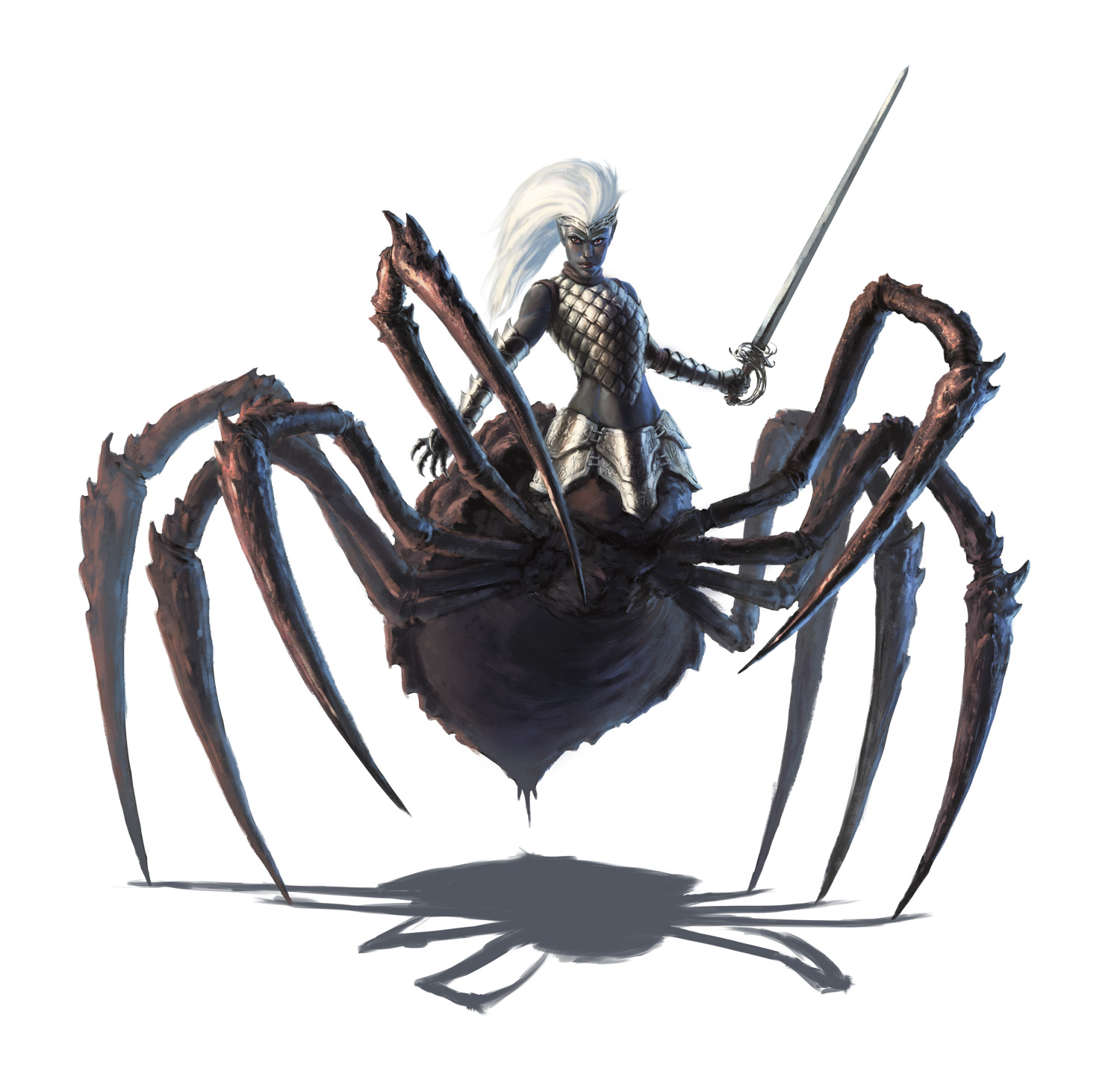 Sticking with the original crew here, it sounds like they come to Randall’s camp to find it abandoned with shocking clues as to the rebels’ vacating.

I’m carrying over the extra GM Fate Point since it wasn’t used in the last scene.

Janson Morn pressed through the failing evening, taking Amelia on a circuitous route through the woods, frequently doubling back to further confuse the trail. The Harper peppered the brawny rogue about a good number of things.

“You talk entirely too much,” Janson remarked. Yet he answered each of her questions.

Janson was a bit of a hothead. Of all of Lord Randall’s rebels, none were more despised by the Constable of Dagger Falls and his men more than Janson. He had hurt a good number of Tren’s cronies on one of his last visits to the town when he was discovered. Now a hefty price was placed on his head, which seemed to delight Amelia a good deal.

“Good for you!” she said in response. Janson’s scowl only deepened.

In exchange — even though Janson hadn’t solicited any such reciprocation from her — Amelia revealed something of her past. She was a street urchin in Waterdeep and had broken a dark slave ring operating in secret there, almost purely by accident. However, it had gained her a number of powerful enemies as well as friends. The Harpers had taken notice of the girl and her plight, and granted her protection. It wasn’t long before she was working along with them, first as a messenger who could get into secure places, and then on to more daring missions.

I’m going to declare A STRING OF POWERFUL ENEMIES as a new aspect for Amelia.

When at last Janson came to a discreet marker in the grass that he sought, he froze at what he beheld.

Q. What signs are left behind? Meat on a Spit, The Rack, Arrows, Alien

Beyond a clearing the two saw the sign of smoldering embers. Smoke was thick in the air along with the smell of burned flesh. Janson abruptly drew his bow and leapt forward.

“Wait!” called Amelia. The Harper donned her hood and made her way to the deeper shadows along a line of trees.

When Janson stepped to the edge of the camp, what he found filled him with tremendous dread. In the darkness was Randall’s most recent rebel camp. The many tents and makeshift stables were tossed aside, ransacked, or altogether burned. Bodies were strewn about, many showing signs of needless wanton torture. Men were maimed, or quartered, or worse. Arrows peppered many trees, showing signs of an ambush or skirmish in recent history.

Janson immediately assumed Constable Tren or his Zhentarim supporters, but his eyes fell upon the body of a dark elf. Hate and loathing filled him. Snarling, he spat at the body, and went to look among the dead for sign of his cousin.

It seems the drow left behind some driders to finish off any threats.

The woodsman searched about. Amelia came to the edge of the encampment, her senses tuned to lingering threats. Janson came upon a figure prone with a broken sword still clutched in one hand.

“Randall!” he cried. Dropping his bow, he knelt next to the figure. Randall was alive, but barely. He had lost blood and treaded dangerously near death’s doorstep. “Can you hear me?” Janson cried, holding his head.

Q. How is this set up? Fire, Chaos, Lurking Shadow, Trap

I already know I want to treat these baddies as Good (+3) Nameless NPCs with EIGHT-LEGGED CURSED ABOMINATION and HORROR OF A LIGHTLESS WORLD with +3 Stealth, +2 Fight, and +1 Athletics. Three of them would be a significant challenge.


Borrowing a battle map, I’m dividing into a tic-tac-toe zone configuration. Anything visible is a usable aspect, plus it’s DARK with a SMOKESCREEN, and there are various burning EMBERS.


I’m also gong to devise a bit different notation for rolls, incorporating them direct in the text using the ellipsis trick from Fate Core along with brief parenthetical summaries.


I’m also going to give the stunt, DANGER SENSE to Amelia along with the Stealth skill at Good (+3) and Notice at Average (+1). 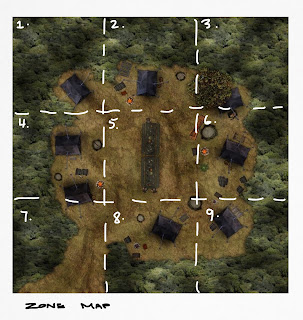 The rightful ruler of the Dale was pale, pierced through the lung with a crossbow bolt. He looked like death had claimed him, but after repeating his prompt Janson saw Randall’s lips twitch.

“Water!” his brawny cousin said, reaching for his skin.

Amelia, in the meantime, cautiously approached from the southwest of the small clearing (Zone 7) clinging to the DARK (2 invokes) and approaching noiselessly (assume action already happened before the conflict). The Harper saw Janson leaning over a figure in the center of the clearing (Zone 5) while keeping to the shadows and scanning the deeper concentration of trees to the north (1 shift). With her keen eyes, she spied three hideous bloated shapes emerging from the darkness — massive spiders the size of ponies with the torso of an elf — dark elves to be precise, with stark white hair. Each was armed with a spear and assortment of other weapons (Zone 2).

Janson was exposed. Amelia cried out suddenly, revealing her position. “Janson, look out!” The ALERTED (2 invokes) woodsman whirled around to confront the danger (free invokes on DARK go away). The rebel drew his sword and charged forward fearlessly.

Janson has the skill, Athletics at Average (+1).

Blade leading, the burly woodsman leapt a fire pit and into the path of two fiendish monsters. The smoke in his eyes and the darkness spared them worse hurt as he pressed them into a hasty defense (1-shift hit after invokes spent). Two of them worked together, thrusting with their spears in an attempt to get him HEDGED IN (1 invoke). The third scuttled westward just ahead of Amelia’s position (Zone 4) into the darkness. No doubt the monstrous beast devised a plan to cut her off from within the deepest DARK (2 invokes).

Amelia put her back to a tree in an attempt to PROTECT HER BACK (2 invokes). She awaited the thing to close, which it did with frightening speed and stealth. A spear out of nowhere flashed out to PINION (2 invokes) her against the tree. She saved herself from getting impaled with a sudden twist, but the cruel tip of the spear dug through the cloak around her neck and deep into the living wood behind her. She was immobilized, her air pipe compressed. She fought for air and was unable to call out.

In the clearing, Janson was surrounded but no less full of fight. He relentlessly sliced at the beasts, missing, but effectively ruining their positional advantage (invoke on HEDGED IN used). The creatures retaliated with terrible efficiency enhanced by the gifts of their unnaturally imbued state. They might have hurt him a good deal if not for the fact that Janson’s dear cousin clung to life not far away (Janson dealt 4-stress after invokes; GM has no remaining Fate Points; Janson has 1). This pressed him into greater acts of courage.
Amelia fought against her restraint as the cruel drider smiled and leaned in for the kill. A secondary short sword waited in its off-hand. The Harper choked, but with a slight movement of her left hand, reached for the drawstrings to her cloak (overcome PINIONED with style). She abruptly disappeared like some street magician, slipping from her tacked cloak and leaving her opponent DUMBFOUNDED (boost). The creature sought the girl, swiping blindly with its secondary weapon. Underneath her suspended cloak, Amelia was OFF BALANCE (boost) from her hasty evasion.

Janson renewed his relentlessness, crying out the name of his cousin. “Die, fiends!” (6-shift hit after invokes; Janson has no remaining Fate Points). One of the monsters curled up in a ball, dead. The other reared up to gain a HEIGHT ADVANTAGE (fail), revealing the sickly yellow markings underneath. Without hesitation, Janson went for the exposed underbelly (5-shift hit), slaying the second beast.

In the meanwhile, Amelia still had her blade in hand. She crawled away from the tree toward the clearing. With an inhuman shriek, the third fiend dogged her clumsy steps. The Harper turned on her back as it approached. The remnants of a fire pit glowed near her feet. With a kick, she sent up BURNING EMBERS INTO THE MONSTER’S EYES (1 invoke after Fate Point spent; Amelia has no remaining Fate Points). The monster shrieked, trying to clear away the burning ash (fail). Returning to her feet, Amelia quickly stabbed at it (fail).

Janson was suddenly at the girl’s side and stuck, (fail) missing. However, now the pair had some advantage over the lone remaining monster. Amelia rolled to the side and hacked at its articulated spider legs, DESTABILIZING (2 invokes) the thing. Janson was ready as the flailing and scrambling monster turned away from him and exposing its flank. With a tremendous swipe he separated the drow torso from the arachnid like body (8-shift hit after invokes).

When the deed was done the two gulped air, looking with disgust at the remains of the ambushing attackers. “That’s twice in one day!” Amelia exclaimed. “We work well together!”

Janson nodded in agreement, but turned toward his cousin. “We can recount our adventures some other time.”

They looked over the fallen rebel leader. They needed to find help and fast. Amelia looked for other survivors as Janson did what he could for Randall. However, his wounds were in need of a true healer.

Janson now has Contacts at Fair (+2).

Janson looked grave as he examined his cousin. “We need to get him to a healer and soon.” (success) After some thought, he said, ”I know of a woodland healer who just might be able to help…”

Danger Sense. You have an almost preternatural capacity for detecting danger. Your Notice skill works unimpeded by conditions like total concealment, darkness, or other sensory impairments in situations where someone or something intends to harm you.
Dirty Tricks. Gain +2 to attack with Fight the first time you’ve deceived an opponent into thinking they have the better position in combat.

Next, we’ll see how Shoshana fares with her escalating troubles. So far, the established pre-written module serves nicely to set starting problems from which to springboard into new events. New intrigue injected here from the introduction of a drow elf element keeps me wondering what is going on. Hmm… Let us continue to find out next time!


The Choas Factor goes up yet again, now to 9, its highest level.
Driders added to NPCs.


‘Get Randall Medical Help’ and ‘Discover What Deception Took Place at the Rebel Camp’ added to thread list.
Posted by Rory Bracebuckle at 10:36 AM