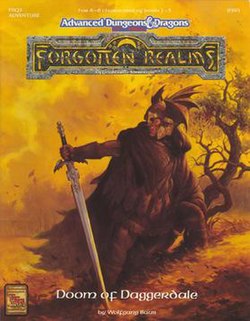 Solo a Module a Month was just announced on the Lonewolf Solo G+ community. What to do? I don’t have a huge repository of modules, but I have some. I’ve been thinking about Wolfgang Bauer’s Doom of Daggerdale, which is an old one I’ve had that I know pretty well. It also fits a setting that know well, so that helps.

Two questions to answer:
The first one I’ll answer loosely. I certainly don’t see tremendous fun in running something I know already. So, instead, using the module’s description and synopsis, I’ll strip the scenario for its elements. I vaguely remember its NPCs, creatures, sites, and motivations. Most of all, the scenario provides a hook and an inciting event. Using the people and places involved and its inciting event, I will use these to set the scene and allow the whole thing to go off the rails. Whenever a plot or motivation or action presents itself from the text of the module, this gives me an opportunity to ask, is this actually true?

It’s totally plausible that this will be come un utterly unrecognizable adventure. In fact, that’s the area about this endeavor that most intrigues me. Having a basic starting scenario is also a big help, because I often have trouble thinking of intriguing or compelling starts to new solo projects. So, there it is. Also, rather than spend time pouring through the module in detail, I’ll rely mostly on the description on the back cover and a few notes I’ll make in advance:

Randal Morn certainly has his hands full! The temple of Lathander, which burned to the ground eight years ago, seems to be the source of a curse affecting the entire town. People are taking ill, animals are dying overnight, crops are failing. All this seems to have started after Eragyn, priestess of Cyric, disappeared from Daggerdale. Shortly before that, a forgotten mage-lord’s crypt was discovered and opened; things just haven’t been the same since.

Constable Tren is displeased with the situation, what with suspicion being cast in the Zhentarim’s direction as well as toward Cyric’s priesthood. He’s undoubtedly making the Dalesfolk’s lives more difficult than usual because of this upheaval. Randal has sent out the call for aid to all who are interested and able to help; his freedom riders have their hands full already.

A missing evil priestess, a mage-lord’s crypt-curse, a plague, and possible Zhentarim involvement: all the elements of a rousing adventure in one place! Where do your characters sign up? Step right this way, won’t you?

A few notes from the top of my head:
None of these are sacrosanct — in fact, I’m expecting a good bit of throwing it all out, and significant points of departure.

Now, for the how, here’s what I’m leaning towards: Mythic GM Emulator to help set scenes. This will provide some amendment to the things that will happen. Using Mythic, I’ll limit the use of the emulator for setting scenes to provide randomness to the setup, and a special treatment towards Fate Questions — questions will center around whether or not particular concepts, conceits, and motivations as presented in the module are true or false. For all else, my preferred method of gleaning details comes from rolling nine Rory’s Story Cubes and answering who, what, when, where, why, and how to color and detail scenes accordingly. I find this latter method faster, and don’t enjoy slowing down to check the Fate Chart.

For my actual game system, I’m toying between my two favs: Fate Core or Barbarians of Lemuria. Both have a good deal of generic power that can quickly mold to D&D tropes. I’ve always been enamored of Nessalantha’s wonderful play report of Dragonlands, a wonderful Legends of Anglerre (setting using a previous iteration of Fate when it was still FATE) actual play. One of the many wonderful things about the report is how she generates NPCs on the fly by deducing what’s needed (skill rank, aspect, etc), keeping it spontaneous and lite. The report, even after several years, has served as a shining example of Fate in a solo environment.

I also love BoL — so quick and easy to stat anything, which is very much appealing.
However, I’m going to take a leap and use Fate Core, adding Nathan Hare’s High Fantasy Magic for those sorts of elements. I’m also going with the Quick Character Creation method in Core to get right to the action. I’m seeing that two issues of the game include Plague and Fear in a Border Town Under an Evil Regime (Current), and An Ancient Evil Awakes (Impeding).

Quickly, I’ll come up with three PCs that I’ll introduce one at a time in my first session to hook them to the scenario:

Amelia Destaroon
A slight dark-haired beauty with a penchant for intrigue and deception.

Janson Morn
A cousin of Lord Randall, Janson is a roguish outlaw ready at any time to let fists fly at the usurpers of his native land.

Shoshana Ezgrandilia
White-haired and pale, Shoshana is a flashy woman in embroidered robes, and a pupil of the Simbul.


High Concept. Adept Learner of the Arcane
Trouble. Brusque and Arrogant To a Fault
Aspects. Seeking the Secrets of a Fallen Wizard
Peak Skill. Lore

Hopefully, I’ll have the tenacity to see this through at least to some degree.
Posted by Rory Bracebuckle at 1:29 PM