An actual play journal of a Barbarians of Lemuria (Mythic Edition) game.

I’ve been anticipating the next session of our 3-person hangouts game (continued from here) for a long time. In this 2 1/2 hour session, our heroes began on the tails of last session’s game. They encounter fell cultists, and a demon, and have a harrowing journey by sea during which they fight a dangerous bounty hunter.

The cultist of Hadron from our last session had gotten away. The heroes hunker down in their usual haunt and are approached by a familiar figure. Dalar the Dealer was the middle-aged man who had originally sold the intrepid adventurers their copy of the map that had led them to riches. Now fearful, Dalar tells them that dark cultists threatened him. They had captured his only daughter and promised to sacrifice her to their dark god if he did not give them the only copy of the map — the same he had sold to them.

The heroes reluctantly agreed to help him, but were loathe to be taken advantage of by unscrupulous business practices. Dalar promised the remainder of his wealth — what little he had. He said the cultists would return the next night to collect the map, and would act on their promises if he did not produce it. The heroes agreed to look into the matter, and if nothing else could be done, would meet the druids head on the next night.

They took to the streets. Garde, leveraging help from his friends in low places, discovered the identity of an errand boy that procured occult items for the cultists every morning at the shop of an old crone who gave mysterious alchemical preparations.

Before they took to their new task, a new ship had meanwhile arrived in Urceb. Its crew included a man both Garde and Agroc recognized from their past. Pavo Rin was an infamous sailor, sell-sword, and bounty hunter that often visited Satarla. Both men had a past they wished forgotten; Lord Festus, and disgruntled lord who had maligned both heroes still sought revenge. Pavo and his crew had entered the heroes’ haunt. Was Pavo’s appearance an accident? Would he be under the employ of Lord Festus? Due to Brom’s carousing antics, the one-eyed sea captain seemed to pay them no mind.

In the morning, the heroes made for the woman’s shop as intended to intercept the errand boy. They descended upon the street urchin and agreed to free the boy from his plight in exchange for showing the whereabouts of the cultists’ hideout. “Rat”, the boy agreed to the promise of a better life.

Straight away, Rat led them by circuitous route and by trap door to a secret underground passage. Having shown them the way and told them the temple’s defenses, Rat was told to await the heroes near the docks.

The heroes infiltrated, taking out two guards quietly. They came upon a sunken temple devoted to Hadron. Several dark cultists were under the spell of some fell magic or illicit substance, and all partook of a ritual, chanting in unison. Four maidens were chained within in preparation for blood sacrifice. The three heroes were able to fan out in the dark recesses of the chamber. When the high priest made ready to sacrifice a girl, the three hidden heroes attacked. Garde slew the high priest with an arrow through the throat, while Brom took out several followers, and Agroc killed two of the priest’s assistants with archery. Brom scared away the remaining followers and together they rescued the four innocent girls. Going out was not easy due to the excess of enraptured kisses they lavished upon their barbarian rescuer.

However, something deeper in the tunnels was awakened or alerted, shaking the very walls. The three escaped with the maidens. Agroc held the rear and witnessed some beast of shadow that could fly and exuded fearsome power. He escaped. No doubt the terrifying monster from the void would have overtaken them but could not pass through the narrow tunnels the issued from the temple.

Reuniting Dalar with his daughter, Esmalda, and having freed three other girls along with Rat, they had the makings of a small crew. Agroc renamed his newly purchased galley (which he bought with his stolen loot in session one) “Esmalda” in honor of Dalar’s rescued daughter. They then agreed to take them to the safety of Lysor where they might find a better life away from the dark cultists that no doubt now wished them dead.

They hastily procured provisions and then plotted a journey along Lemuria’s windswept and dangerous eastern coastline, a journey that promised at least three or four difficult days  of traveling solely by sail. The prevailing winds were with them, which was good, but they had no crew to man the galley’s oars should the weather turn or the winds flag. As the heroes departed, Pavo Rin appeared again with the thronged folk that came to see the heroes off. His one good eye challenged the three as they sailed away. He recognized them. Perhaps he would make good on the bounty on the heads of Garde and Agroc.

The first day at sea under the expertise of Agroc, who was a native of the pirate isles, they made good time and avoided the many perils of the rocky coast. However, on the second day, there appeared far behind them the sails of another ship that was bearing down. They did what they could to try and outrun whatever ship pursued them, but their hunters possessed a full crew of oarsmen. By the day’s end, Pavo and his Sea Drake made ready to overtake and board the Esmalda.

Agroc and his friends decided to try and lose pursuit among the dangerous shoals near one inlet they spied, hoping to snag their enemy. However, they ran aground, giving their enemy time to close the distance.

A fierce battle raged between Pavo’s well-armed men and the remaining heroes. The Esmalda floundered, taking on water, and the Sea Drake burned. Brom took out most of Pavo’s experienced men with his savagery, aided by Garde with his arrows. However, Garde lost his bow as the sinking ship listed. Some of the fearful slaves issued forward to challenge them at their captain’s command. However, Brom promised them freedom; and having witnessed his effectiveness in battle, they submitted. 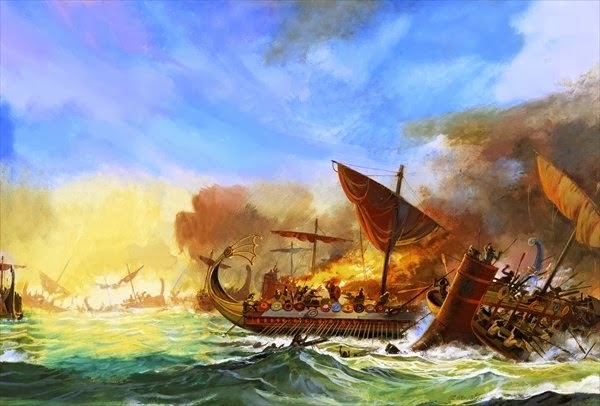 Agroc swam around the two ships to take the aft of the Sea Drake stealthily. When he climbed quietly aboard, he took Pavo by complete unawares as the captain ordered his slave galley to put out the flames. Agroc would have ran him through with a well-aimed sword to his backside, but somehow by a trick of his hidden mail, Agroc’s clever blade was turned aside. The two fought furiously, exchanging blades with the skirl of steel.

Garde leapt aboard the new ship with a daring swing across line to land behind Pavo. He nearly killed the bounty-hunter sea captain as well, but Pavo disappeared into the churning sea and did not reappear. Likely, the heroes had not seen the last of Pavo Rin!

The flames doused and the oarsmen pacified, the heroes had managed to capture a better ship. They completed their journey to Lysor, at which point we ended the session.

BoL’s simple rules really lend themselves to quick, easy fun. Looking forward to our next session!
Posted by Rory Bracebuckle at 6:59 PM