I haven’t posted for such a long time! I still dabble with solo gaming, but more casually without preparing for public posts. However! ...It is that time of year again. Yes, Solo Gaming Appreciation Month is here! A number of categories exist (in addition to “just play something, dammit!”), including New and Shiny.

Well, it’s not exactly new with its release last December/January, but I still hold Untold: Adventures Await in one of my top “New and Shiny” acquisitions. I really enjoying playing it, either in its native state, as well as coupled with another rpg to handle task resolution. It also has a strong board game quality to it, so it covers that spectrum of SGAM this year — to incorporate board game features into a solo rpg session. Two in one!

For this one, I’m utilizing Rory’s Story Cubes (original set) and joining with one of my favorite lite systems out there, namely Barbarians of Lemuria. Going with character generation first, rather than the standard (set the scene and then introduce characters), here’s some info on our heroine. Inspired by some Larry Elmore old-school art, I found a piece for a fantasy Xena and Gabrielle analogue. 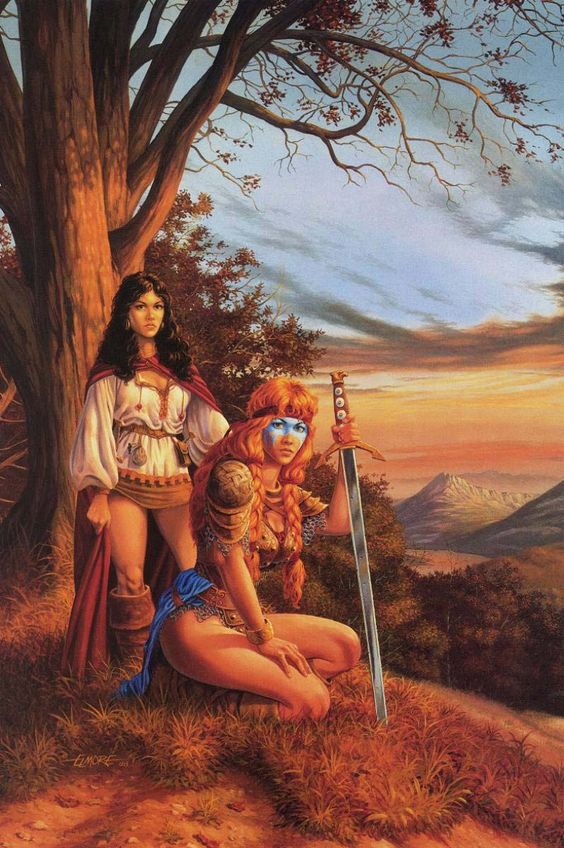 Asara was daughter of the mighty Thagric, chief of the White Bear clan, and lived and warred among them for many years. (Barbarian 2)

Thagric had no sons and taught Asara the basics of forge and tongs, telling her, “Through steel, you shall pass on the lore and traditions of the White Bear clan should our people die out.” (Blacksmith 0)

When war tore apart the clans of the Volgar vale when the Dark Warlord Tolech swept down from the north, Asara aided the healers, doing her part to save the dying. (Healer 1)

When the survivors enlisted with King Kalvar’s army when Valgard united to push back Tolech and his bloodless minions, a vengeful and wayward Asara held nothing in Valgard in reverence and became a cutpurse and burglar. (Thief 1)

Since that time, she has picked up a sidekick, a prisoner she freed from a despot in Nelheim who was from the south named Manda.

And, without further ado…

Episode 1: CURSE of the BLADE

The episode begins near a ford along the Frozen Tyr where a group of bloodless are attacking some of the King’s elite champions. The champions are being overwhelmed and are screaming out desperately for help. Asara has no intention of helping, but she is taken by surprise by a handful of the bloodless when she is spotted.

Asara fights valiantly through the throng like a fiend, taking some minor scratches. The champions hail her and she rushes to their aid before more bloodless reach them, for only through unity is there hope to win. She faces three more of the things. Asara destroys them and rallies the men to repel the rest. Some survive, but despite the heroine’s efforts, many perish. She leads the scant remainder to safety.

When they reach refuge, Asara and Manda find a mysterious man among their midst who tends to other wounded and sick allies. The man is dressed in strange robes and tends to a sick champion offering a blessing to the returning warriors. Asara recognizes the man…

…The man is a charlatan who begged for favors among her father’s people and who deceived them all. His name is Marro Mhune, and he was banished by the White Bear clan, but not before terrifying Asara as a girl. They believed the man was some sorcerous druid. Whether Marro recognizes Asara is not immediately known.

However, Asara’s contempt cannot be concealed and she lunges at the man. Asara is restrained, and the group takes a vote as to her fate. Marro claims only to be a healer and to want their friendship. Asara and Manda are sent away.

The episode continues near the ominous Witch’s Teeth where a horde of bloodless pursues Asara and Manda. The barbarian woman had intended to circle around the tundra to follow Marro and his men, but instead gets inexplicably turned around, and now the two are hunted.

Manda is scared, but Asara keeps her cool, finding a narrow choke point through which only two can assail her. Asara prepares fire to keep them at bay, but she is taken by surprise and Manda is hauled off by fiends. Heedless of danger, Asara leaps after, loosing her advantage.

She slays the foul undead, whittling them down one by one while tailing them and taking a few scratches in the process, but eventually frees Manda. Some sorcery had been the cause of driving them off track toward an elaborate trap. Whatever the power, Asara gets lost in the Teeth, with a peculiar disembodied cackling following them everywhere.

It is discovered that an Old Crone who resides in the witch’s teeth was after Asara’s ancestral blade all along. It seems there is much more behind the old sword forged by her father than the barbarian girl knew.

The final showdown takes place in the necropolis of the witch’s teeth. The undead continue to dog Asara’s steps because they are ordered to do so by their master — the old crone. At the same time, the old crone herself, a ragged and ugly hag behind a mask, accuses the barbarian girl of bearing a curse that affects the north.

As the bloodless descend upon her, the barbarian rips through their ranks with renewed vengeance, successfully obliterating the eight that stand around her. Six more of the fiends threaten Manda, but Asara leaps into action, destroying all of the dusty cadavers.

Asara denies being the source of any curse that might affect the old crone. In response, the witch cackles, mocking her. Asara takes Manda by the arm and attempts to leave, but they are rooted in place.

Instead, her barbarian rage wells up within, and she leaps with sudden ferocity at the old witch. The witch blasts her with sorcery, but the minor spell does little to stop the raging barbarian warrior. The witch draws a wicked blade, and the two spar. However the old woman is no match for the young taut barbarian warrior. Asara defeats her. 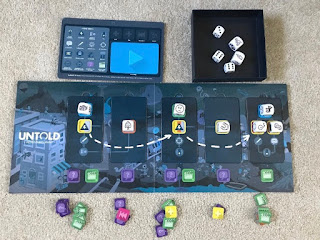 The witch is dead. Yet there is some concern surrounding Asara’s ancestral blade. What could possibly be attached to the blade? What is its significance? Furthermore, what is the significance of the druid charlatan’s appearance? He has infiltrated the kings ranks! What did he get from the old crone? Knowledge? Wealth? Or something more devious still?

Asara must discover what importance lays within the tempered steel of her sword, and she must hunt down her old nemesis, Marro Mhune, before he can cause any more mischief to Valgard.
Posted by Rory Bracebuckle at 5:47 PM