Mask of Khatri, a Perilous Intersections and FU walk-through, part 3 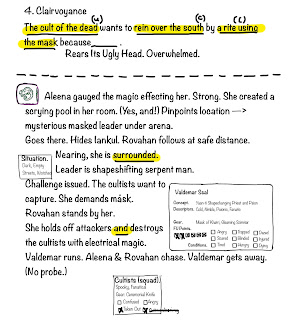 Continued from here is the continuation of my Perilous Intersections walk-through examining scenes four and five.

Leaving off with a rather unwelcome curse that threatens to derail her quest, our heroine goes in search of the death cult leader. Here, I gave him a name, and used my chosen seed for scene four to give a bit of detail about his nature. I decided to give him a serpent-like aspect.

She tosses a point to use a special power and tracks him magically. Aleena is easily surrounded, but demands the mask anyway.

She handily conquers most of the challenges here, all of which were set up to provide a challenge as suggested by the increasing Danger Level. Except being able to capture the fleeing Valdemar, she defeats her opponents. This leaves her in the fictional position to deny a story probe for this scene.

Also, no change in the DL happens here, because there's no movement to either the positive or negative. In the fifth scene, Aleena's magical compulsion gets her into plenty of hot water in Arrabar due to slaying some officials. This is a long chase scene ending in a confrontation in another land. I posed the challenge of travel inspired by the seed of the undead boatman, which could have derailed her had she not been able to determine his destination.

Confronting her target, I went ahead and posed a story probe just for fun that might turn the whole plot on its head. The answer was affirmative, which meant that the rakshasa who enchanted Aleena is behind the real plot. Even though I had confirmed answers for some of the Big Questions, it is still acceptable to amend them along the way before the Big Boss Fight phase.

Lastly, she causes trouble for herself in Turmish before getting captured there, earning her some points. The Danger Level is already at its highest point, so cannot escalate further. In the next scene, all missing BQ's must get answered, because there is only one seed remaining.

What will happen next? Will she be forced to play the unwitting part in Relajii's nefarious plot? Can she find a means to thwart whatever dark plan he has and free herself from her curse?

The conclusion of this short adventure in my next post...
Posted by Rory Bracebuckle at 12:00 PM