In and Out of Threshold, part 2

continued from here, Adventure one:

Adventure 1: Cave of the Vengeful Fish-Men 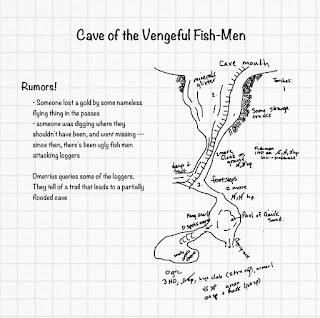 Our heroes begin their adventure by visiting the local tavern. There, they hear many rumors. One person has lost their gold, snatched out of their hands by some flying monstrosity from the passes. However, they also hear about someone who disappeared from a logging camp north of town. They hear that a man went digging where he shouldn’t have been, and has not been seen since. After his disappearance, there’s been a rash of purported ugly fish-men attacking loggers.

The four friends decide to check out the last rumor. Trekking north, they arrive in the logging camp. Dmetrius asks some of the loggers, and discovers tell of a trail leading to a partially flooded cave. Naturally, the group goes to investigate.

The group quickly finds the trail and follows it along the edge of the river. Some strange fin-like marks in the ground look as though they might be tracks left by some bipedal fish folk.

They enter a glittering cave full of minerals out of which flows some sort of underground river which forms a tributary of the Windrush River. Lighting a torch, they explore into the camper. It is not long before they are met by angry fish people. The group fights as more and more of these things come out of the woodwork. They fare well. However, Vlad loses his bow in the river. The Ranger decides to dive into the water to fetch his bow, but more of the things lurking beneath the surface of the water hold him down. It is with the help of mighty Sara that he is able to come out of the water. But he managed to keep his bow!

The group follows the only way they can that is not flooded into a seemingly empty room. However, Sara, the barbarian, sinks halfway into a concealed pool of quicksand. She is able to pull her self out with a bit of struggle and the help of her friends.

Two other passages lead from the quicksand room. Down one, Vlad’s wolf, Fang snarls viciously at whatever he smells there. The smell from beyond is horrible. Down the other passage, the group here’s a strange sporadic chopping sound.

They decide to explore the smelly passage with caution.

They descend down a natural staircase into a largish room littered with refuse, and something used as a pallet for sleeping. Old bones of previous meals litter the floor. Dmetrius is standing rear guard, when a huge ogre closes in from behind, trapping them in the room.

Dmetrius tries to defend, but a giant club catches him in the midsection and flings him across the chamber. He crumples. Sara, however, charges with a war cry to avenge her friend. In a single blow, she defeats the ogre.

It turns out that the cleric is still alive, albeit barely. The others do what they can for him, but it is plain that they need to get him back to the church, where healers can tend to him. They search the area, finding a stash of gold and silver, as well as a mysterious grimacing green mask.

They retreat from the cave without any further mishap. Once back in the town of threshold, Piotr takes the mask to a dealer, who seems to recognize the artifact. The dealer claims that a local lord had lost a mask such as this and might pay to have it returned.

Dmetrius is healed, but recalls a dreadful dream when he lay dying that he may in the future be called upon to perform an assassination. And the group goes shopping…

To be continued...
Posted by Rory Bracebuckle at 12:00 PM