In and Out of Threshold, part 3

Adventure 2: Return To the Cave of the Vengeful Fish-Men 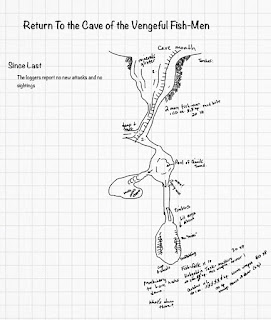 The next day, our heroes return. First, they stop at the logging camp to inquire if any further signs of aggressive fish folk have been observed. However, it has been relatively quiet.

So, they push on back to the cave. Two more fiendish fish people confront them as they enter, but both Dmetrius and Piotr deal with the two in quick order.

Returning to the last passage that they had not yet investigated, they listen carefully. They would assume the mysterious chopping noise would stop. However, the sounds of chipping still is heard with renewed vigor.

Vlad carefully and quietly slips forward to spy on what is seen ahead. He traverses a very long passage. Along its length, several timbers are laid within. The chipping sound increases in volume. There is also a bright illumination up ahead.

When the ranger peers ahead into the next larger chamber, he sees a network of scaffolds along the walls of the cavern. A multitude of fish folk are at work, laboring with many wheels and cogs.

Two very big and ugly hobgoblin taskmasters are barking at the fish people, snapping a whip to work them harder. A handful of other smaller goblins also assist in bullying the fish people. It is some fiendish labor camp.

Reporting to the others, Sara the Strong wastes no time in charging ahead, screaming a war-cry at the top of her lungs. Her surprise is complete when her battle ax connects with several goblins, flinging them left and right into bloody heaps.

Vlad enters the room next, his wolf charging forward while he releases arrow after arrow. He strikes one of the taskmasters in the neck, but the fiend continues on. When a hobgoblin orders the fish folk to start flinging rocks down at the ranger, he is forced to take cover.

Dmetrius enters next, standing his ground, but taking several nicks and minor wounds. From behind, Piotr watches the action, but a lone goblin sneaks up behind him and grabs him around the neck.

Piotr fights with the goblin, who stabs the wizard in the back. Down on the ground, Piotr is not finished. He quickly draws his own blade, seeing that his quicksilver vials have all skittered from his grasp. In a quick motion, he stabs at the creature, killing it, but not before the goblin's blade simultaneously comes down and slays the wizard.

Only Vlad escapes injury. But finally, the goblins and the hobgoblin taskmasters have all been dispatched. Communicating with the fish people is not easy, but Dmetrius manages to communicate that they are free. With a tense silence, they all file out.

The group is saddened to see the wizard fallen. They rummage through the goblins' bodies, and manage to scrounge up several more coins as well as a fine silver fleece. Dmetrius investigates further, discovering that the machinery is all installed for the purpose of boring a hole into the ground down below. They all wonder, for what purpose?

They bring Piotr’s body back to the church to be buried. Dmetrius feels it’s their next task to contact the church and tell them their findings. Then, perhaps the town officials may investigate further.

Sara, however, goes to the local tavern to sing a song of lament as she goes into her cups. “Oh, how the merry four are now sad three… But now, the crotchety wizard at last is free.”

This was a fun experiment. I never had a chance to rely use the wizard's powers. All of this was randomly determined and interpreted through logic. It all represents about three hours of playing time total, along with note taking, which is pretty fast for me. The downside, as with any PbtA game, all those partial results takes a lot of creative energy...especially for one person.

Will I play more? Probably. It was a nice departure to do everything scribbling on a map and imagining rather than the tedium of prose-esque writing.
Posted by Rory Bracebuckle at 12:00 PM