I realize my blog has flagged and fermented, but, Glory be! I had a game last night! Meeting with my fellows, including the fine players of Agroc, Garde, and Brom, we continue from here with the Myths of Lemuria campaign report. No, this is not a solo report, but a Hangouts small group that plays Barbarians of Lemuria. So sue me! Back sometime around May of 2018, we had our third session. I never wrote a play report after that session, so our collective memories are somewhat sketchy. Last night was our fourth session.

Session three involved the heroes arriving in Lysor aboard Pavo Rin’s captured ship, the Sea Drake, along with their “crew” — intended victims rescued from the clutches and machinations of the black druids back in Urceb. Once anchored, it is not long before they meet a friend of Pavo, Orlar, captain of a vessel moored at the harbor. Orlar challenges the heroes, and the harbor master gets involved. It is resolved, but not without grudges.

By night, Orlar and his men raid the Sea Drake. The heroes, expecting some duplicity, repel and kill the captain and his men, disposing of the bodies. The Sea Drake is partially burned in the process. The next day, the heroes cut in the harbor master on the spoils, selling what remained of the ship and stores.

This signaled an advancement. The following downtime events took place:
The heroes continue their new adventure. Using their loot, they have bought kroarks to make a later escape from Lysor when they have finished their quest. Rat, the rescued errand boy of the black druids, has vowed to join the three on their journey. He agrees to stay behind at the Winking Wench to guard their kroarks while the heroes plunder the Afyraneum. Before leaving the Wench, the heroes notice a fierce warrioress with blood-red hair and teeth filed to points loitering in the common room. She is both repulsive and at the same time strangely alluring; and she can out-drink any man. Although she never seems to speak, she notes the heroes comings and goings.

Garde’s contact, an old crone, leads them into the cliffs overlooking Lysor to an entrance behind a small cascade. There, a warren of tunnels leads into an old crypt that eventually joins with the new catacombs under the Afyraneum. Through this way, they can gain entrance unnoticed.

Inside the ancient crypt, the pass through wet caverns, slick with algae. Agroc takes a minor spill. They soon join to an ancient looted crypt, likely pre-dating even the establishment of Lysor as it is currently known. Their exploration takes them to an iron door which Brom opens, but they quickly get lost within. Inside one of the tombs, they find a sarcophagus in a cramped little chamber. The lid is off and the occupant writing something in a strange script on the walls. A dead being by the name of Thuzzul-Khan demands they find the wrist bones of someone in the new crypt under the Afyraneum and return to him. In exchange, he instructs them on the way to the under-temple.

Fast forward a year and a half, and we pick up with SESSION FOUR — starting from the new crypts of the temple. Again, memories were foggy and I made several mistakes from overlooking notes, so not all the details were consistent. But fun was had (I believe), nonetheless. 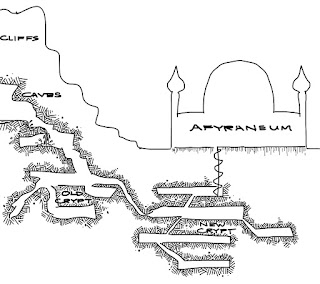 Picking right up, the three heroes explored the new catacombs. The encountered two attendants, men charged with removing detritus from a recent ritual. The companions cornered the two and coerced their help. They were terrified by the sudden and unexpected heroes’ presence. First, they were led to the tomb of he who Thuzzul-Khan directed. Disarming a sarcophagus that was charged with poison gas, they found within only some fine linens and a glass jar containing only the minute wrist bones of someone long deceased.

One of the two crypt keepers escaped. However, the heroes were little concerned. They coerced the remaining captive to lead them to the access point into the temple. Dorn, their captive, did as he was asked.

However, when they came to the lengthy stairway leading to the temple proper, Dorn’s escaped companion was leading two temple guards down into the catacombs to find Dorn and the looters. The three heroes laid a trap for them, injuring Dorn’s companion and quickly incapacitating the two guards.

They got a quick layout from Dorn about the great temple’s features…a main central dome housed the Jungled Atrium, where the night lotus was known to lay. A jungle of wild and tended foliage grew under a beautiful dome with great crystal windows. It helped create one of Lemuria’s most beautiful architectural wonders. Only the high priestess and her entourage were allowed within the atrium, and even then only on special holidays of the new moon. A keeper had a set of keys to the main entry — a great pair of bronze doors.

Four towers marked the corners of the temple, and each had such amenities as the harem (priestly dormitories), the vaulted library, the shrine of crystals, and the baths of new life along with its attached vestment room. The heroes made for this direction. The hour was pre-dawn, and they crept easily undetected there. After choosing their appropriate priestly disguises, they decided the best way to the Jungled Atrium was to climb a tower and gain entry from the outside of the dome, down to a grand balcony, and then to the atrium floor.

They parted ways with Dorn, paying him well for his service, and offering the promise of death if he should double cross them. They attempted a furtive entry into the atrium, but the crystal window through which they were trying to pass shattered. They entered quickly, repelling down a line of rope.

Inside, they noted the wild thick growth, well-tended paths, fountains, and gardens. They made for the center, but Brom, the Valgardian barbarian noted the presence of something bestial. They lit a torch, and immediately a massive two-legged reptilian predator leapt out of the foliage to attack them.

This was a pet bronyx (a small chark, or T-Rex) that served as the guardian of the precious night lotus. Although there was much chaos and awkward fighting space, Brom killed the primordial monster in two very powerful blows. (In truth, a bronyx is a very formidable opponent. Brom’s player rolled boxcars twice…in a row! on each of two rounds. These he augmented to Legendary Successes with two Hero Points, thereby scoring about 20 damage each. This is a very uncommon occurrence.) After its death, they noted a collar and harness about the beast.

The horrendous shriek of the beast alerted the temple guards. In the center pond, the three found the lotus and took it. They made their hasty exit, climbing up to the dome, and repelling off the outside wall of the temple to disappear in the city streets outside the grounds before they could be located.

The three returned to the Wench where they gave the prize to the very surprised harlot. She planned to produce a powerful intoxicant from the precious flower. Inside the Wench, the strange red-haired warrioress remained, watching the three intently. The group still planned to re-enter the ancient catacombs to deliver the wrist bones to Thazzul-Khan. Agroc decided to find out more about the woman.

In truth, this woman was a lesser demon in human form. They learned from others that she was thought to originate from Zalut, the City of Magicians. In actuality, this was a summoned demon who worked for Tharungozoth the Slaughterer directly. Unable to control it, the demon devoured its summoner and slew Morgatha, an infamous Zaluti assassin, taking her place through disguise.

Agroc was charmed by the demon, and she let it be known that she wanted the little onyx statue he still had from their exploration of the undercity of Urceb. Agroc’s companions managed to pull him away from her in order to complete their delivery to the undead sorcerer.

This they did, traveling back into the cliffs overlooking Lysor. Thuzzul-Khan got what he wanted. But when the heroes climbed back out to safety, they encountered the demon impersonating Morgatha just before leaving. By this time, Garde had possession of Agroc’s statuette for safekeeping.

Brom knocked out Agroc to prevent their ensorcelled companion from doing anything unwise, which drew many laughs among the players. Morgatha drew her blade and charged Garde, now bent only on obtaining the statuette. She was a formidable opponent, and again, Brom managed to land the killing blow. The demon was reduced to a foul sizzling pool of black ichor. Agroc remained unconscious during the fight, and Garde was seriously injured.

However, they had accomplished what they set out to do, and the messier, the better! One note to myself, I feel BoL works well with only 2-3 heroes. Any more than that makes it difficult to balance encounters to provide enough of a challenge. BoL characters are very competent! I’m finding I’m already having enough trouble challenging Brom in particular. He is a tank that can do little other during combat than melee with his trademark Valgardian blade and well-endowed Agility and Strength. Granted, rolling boxcars (and many other high rolls) made it a more extreme example. The other characters are perhaps more balanced with points spread more evenly over their attributes and combat abilities. As a result, they got their share of scrapes and bruises.

Poor Agroc! Not only would he not his wedding dreams with Morgatha crushed, really unfortunate rolls plagued his evening. We hope that won’t prevent his player from returning in two weeks for session #5. :-)

Next session, the heroes attempt a dangerous overland escape from Lysor over dangerous wilderness atop irritable kroark mounts. What could go wrong?
Posted by Rory Bracebuckle at 11:02 AM