Weeks after I intended, my Hangouts group finally convened for part five of our Myths of Lemuria campaign. In this meeting, Agroc’s player couldn’t commit, but we swapped in another longtime friend of mine. In our last session, the heroes sought the black lotus in the temple of Afyra in Lysor. The mark of a successful adventure is not necessarily when the heroes ultimately succeed, but when do so leaving behind a messy fallout forcing them to go on the lamb.

And so, they did.

Their previous exploits left them with a team of kroarks, supplies for a lengthy journey, and their eternally grateful tagalong, Rat. Garde noted that he still had Agroc’s onyx idol original found at the beginning of session one but handed over to Garde when the old pirate was seduced by the demon on their final session four confrontation. Their flight from Lysor followed one best course — the open swards between the Festrel Swamp to the east and the nameless jungle to the west. If their path took them to Oomis, so be it, or perhaps adventure plumbing a forgotten ruin along the way might occupy their flirtatious attentions. Whatever their fate may be, this trackless no man’s land was the clearest, fastest overland path by foot or claw from the (no longer) Serene City.

The newest member of the group was Menekar Kaio. I presented him as a pregen for my friend who was a Barbarians of Lemuria novice. As such, I tried to give him a few things that would help plug him in to the group: he filled in some missing skills with careers in scholar, tracker, healer, and beastmaster, giving him a reason to join as a guide through the wilds and as a competent beast handler to manage their brutish reptilian mounts. He was also a light fighter relying on archery, and had a dire wolf pet. I also picked an origin of Lemuria that would require little to no investment in the setting for my player, so chose his background from the Empty Lands with a quasi ancient Egyptian feel.

The group had been traveling the barren grasslands for over two weeks, braving storms, depletion of supplies by scavengers and vermin, and other hardships. Evidence that they were being stalked by a clutch of terror birds drove them. They decided to stake their additional kroark to the ground (again, Agroc never showed up to their departure rendezvous) and unload their unnecessary supplies to gain speed. This worked, but left them almost entirely depleted with hundreds of miles to the nearest civic populace.

The next day, they chanced upon a savage girl bound to an old withered tree. You guessed it! The tree of woe. Brom rescued the unconscious girl who, after roused, was at first hysterical. However, she quickly warmed to the unlikely pack of heroes after being fed. She spoke gibberish, but Menekar, the resident authority on the area, recognized her as a native of the Festrel.

We used language quite a bit in this particular session, including some esoteric and ancient tongues. Very cool! None spoke Frestrelish, however. She called herself Talasa. Through a series of mimicry and basic words, they learned from the girl that there were men not far north, and she didn’t characterize them as particularly dangerous. So, the four, now with Talasa clinging behind the mighty Brom, ventured that way.

They soon came upon a sizable gathering encamped at the base of a large mound. At seeing this Talasa leapt from Brom’s saddle and refused to go further, but promised to wait there until the four returned with provisions. After a debate, the four decided to approach the camp.

Even from the distance, they estimated many scores of men among a handful of tents fanned out in a semi-circle at the southern base of the mound. A stockade of stout zannibal timbers held a beast pen, which included at least two mighty eldaohon, and a separate stock for slaves. A modest watchtower looked out southward from the mound. Some labor was underway here, and there was dust and trampled earth everywhere. However, the men of the camp did not have the look of a war party.

Their approach went unnoticed until they were a few dozen yards from the entry. A handful of armed but bored lookouts challenged them. Brom announced their straightforward purpose. (Note that both he and Mendkar repossessed the “can’t lie” flaw.) A guard quickly brought a wizened veteran scarred by wars who greeted them and invited them to his tent. Rat remained behind with their kroarks.

Falzon Bryn introduced himself as the captain of the armed men and offers them wooden bowls of lavish roku-wine and a platter of water fruits. He spoke candidly, explaining that their expedition here was financed by a wealthy madman who uncovered the existence of a ruin here. They were conducting a dig, aware of some treasure long forgotten mouldering in a ancient ruin under the earth. They had discovered an entry but uncovered only misfortune when none of the slaves lowered within returned alive. Screams of horror ensued after each instance of lowering them down.

The group negotiated to solve Falzon’s problem dealing with whatever guardian or trap prevented their ingress in exchange for supplies. Falzon was smug, dismissive, but eager to agree — most likely on account of his boredom and that he expected no different result from the newcomers.

Before they went to survey the only known entrance, Menekar challenged Falzon whether his men enjoyed leaving slave women staked out in the open. This angered Falzon who ordered them to move along without his aid or accept the task. They agreed to the latter.
When they passed through the camp, they noticed many unusual slaves. Galgilon was their slave master, and among his stock was a great number of mighty blue giants, which most of the heroes had rarely, if ever, before seen. The dig site had many stones unearthed and cast aside, an assortment of hoists erected and line descending into a ten foot square hole down into the gaping portal. The burly and cruel Galgilon reported that some fifteen feet of earth covered a stone chamber, and another twenty feet descended to its floor. They didn’t know what peril lurked within, but once lowering slaves in, it was only a matter of moments before their terrified screams were forever silenced.

The heroes took torches, supplies, and were granted two very malnourished slaves to join them. It was clear Menekar could not take his wolfish companion with him. He remained behind momentarily while Brom and Garde descended within to take an initial assessment. 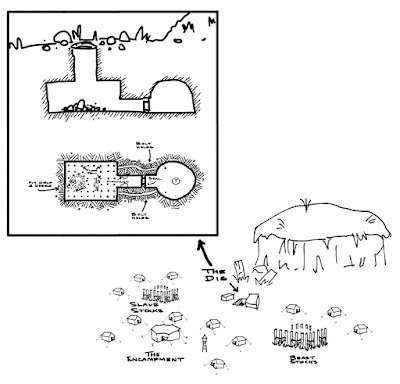 Once lowered, they found a pile of rubble directly below. It formed an island amid a worked stone chamber of ancient aspect and decor. Many bodies were strewn about. One was impaled upon a spear like stake that was thrust up through a hole in the floor. All about the uncovered portions of the stone floor were many similar round orifices. Brom tested one cautiously, discovering the trap mechanism.

Over the next two hours, they ordered stone lowered which they carefully placed in order to create a sturdy covering leading to the far northern recesses of the rectangular chamber where eventually the room’s only visible exit was revealed. Once they extended their bridge halfway toward this exit, they spied a mysterious and hideous shape moving ahead. Garde lit an arrow and fired it forward, revealing a huge, revolting snake possessing the head of a woman that lurked in the darkness. She hissed a curse at the two, and suddenly the spears throughout the room activated in full, protruding up and down at random from their mechanical pockets.

Menekar quickly joined them. The stones they had placed began to crack from the violent spear thrusts beneath. Menekar called out to the creature which had darted at the edge of the chamber to one corner. He tried Sorceric, one of his languages, and the creature responded!

“All die who enter the realm of Zaglazar!” it said, and disappeared.

Next the guide attempted to discern a pattern among the thrusts, which he determined. After a count of seven, he darted north to the relative safety of the passageway. He was clipped by a spear during his dash, but did not suffer any lasting harm. He discovered a series of winch levers, one of which deactivated the trapped floor. The others crossed without mishap.

At the end of the short passage, they came to a great bronze door. There was no sign of the creature. Menekar again deciphered a puzzle — the ancient versions of the gods lined a sunburst dial relief. However, there were 21 instead of 20. By process of elimination, Menekar located Zaglazar, which was a dial control to open the ancient seal.

The portal swung away revealing a circular domed chamber spilling over with jewels and precious things treasures. The hiss of the guardian was heard within (this was Salishme, a slorth — one of the sorcerer-kings’ ancient creations and one of the original species of Lemuria). In Sorceric she cursed them: “Stupid man things! Here, you will die hideously!” Menekar was able to reason somewhat with the thing. “Take what you want and begone,” she then said, “never to return! But do not touch Zaglazar’s velum!”

They deduced something was concealed in the back recesses of the treasury. Menekar asked if there was another exit. Salishme hissed, unwillingly to reveal and further information despite assurances the group would help her. As they probed, Salishme suddenly ambushed Menekar, wrapping her powerful coils around him. Garde had an arrow prepared, but only grazed the monster. Brom, in his usual style (and a few hero points spent), cut her in two.

After Menekar recovered some of his strength, they probed the far recesses, discovering on a pedestal a strange black leather swath. When Menekar touched it, his hand recoiled. This strange unwholesome skin writhed and pulsated, being covered by an apparent web of living veins. It had the look and texture of a bat’s wings. Garde put a torch to the horror and it burned with a audible screech of agony until it was reduced to dust.

The three lined their pockets with treasure and sought an exit, planning to tell the excavators that they had accomplished their directive. When they came to the exit, they saw an unfamiliar gaunt figure staring down within. The heroes explained there was treasure.

“Bring me the vellum,” the repugnant new figure demanded. “Bring it to me or be buried within.”

The heroes retraced their steps. Inside the treasury, after a search they found a trap door in the floor — one Salishme might have been able to access. It led into a muddy, slug infested narrow watercourse far below. The heroes delved into the muck and followed the flow, making sure to reactivate the trapped floor and reset the treasure vault’s bronze seal before they did.

The underground stream dumped the three into a boggy area a mile or more from the mound.

What will the heroes do next? Will they retrieve their mounts, Menekar’s wolf friend, and Rat, their youthful follower? Or will they take their pocketfuls of ill-begotten gains and leave all behind them? What about Talasa, their freed slave girl? What is her part in all of this? Will Falzon and the mysterious new figure hunt them to the far corners of savage Lemuria? Find out next time!
Posted by Rory Bracebuckle at 12:29 AM