Continued from here (my #SoloAModule proof of concept) is my second post for 2019 Solo a Module Month, in which I discuss the heroes. In adapting the Dragonlance story to a different setting with wholly different themes and tone, the original characters, as much as I enjoyed them, just won’t do. But they still provide some inspiration. Why not take a look at the original Dragonlance trilogy’s iconic roles to help design Lemurian analogues?
I would never contemplate running so many characters (although running Untold in default mode is a breeze, since an action allotment makes it no harder to run a bunch than just one character), so some roles and concepts will get rolled up into one or else discarded entirely. Some are clearly NPCs (namely, Goldmoon, Riverwind, and Kitiara), and so can be exported to such uses when the action necessitates.

For my #SoloAModule PC ideas, how about a dishonored noble on the run with lots of experience who has taken a savage refugee princess under his wing? There’s a little of Sturm, Riverwind, and Flint to go around in that one concept.

We need a troubled Tanis figure, which has enough complication already wrapped up in him not to require another role thrown in. He could have his romantic interest tag along coming-of-age person with a heart of gold (Laurana, Tika, Caramon) always on his coattails.

Could you guess? I’m throwing out Tasslehoff, because I see plenty of trouble without throwing in everything he implies. Not that I hate Kender or anything, really. He’d just be me least favorite to have around when I’m consolidating roles into a reasonable number.
A mysterious, troubling magician type will be there, of course; maybe even someone who is secretly a morgul (vampiric type) from the Lemurian setting. Naturally, that’s our Raistlin counterpart.

That’s four, plus an NPC to represent Goldmoon when the time is right. Still a big number for me to run for a solo game, but that will do fine. Although Untold recommends setting a first scene before introducing the characters, there are different implications at play here. I’ll go ahead with introductions now… 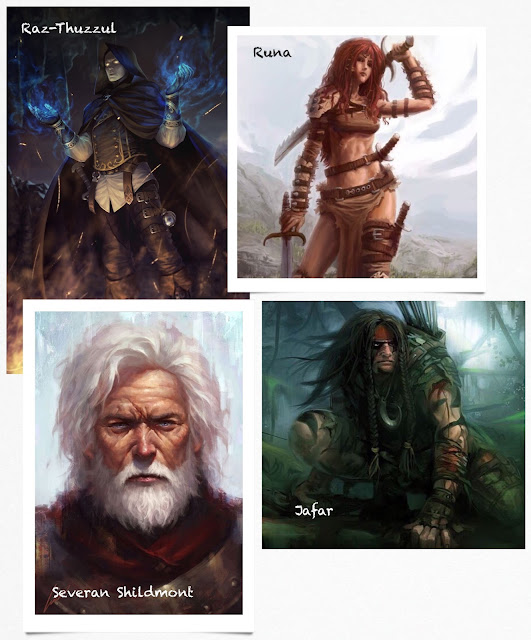 Strength 2, Agility 1 (0), Mind 1, Appeal 0
Melee 2, Ranged 0, Defense 2, Initiative 0 (-1)
Noble 1, Priest (Fyrzon) 1, Knight 1, Vagabond 1
Origin. Satarla
Languages. Lemurian, Ygddari
Traits. Arrogant, High-born, Marked by the Gods
Lifeblood. 12
Hero Points. 6
Fate Points. 1
Trappings.
Born of the House of Shildmont in Satarla, Severan was mentored and brought up to be a scion [noble], his father, Avitus, a notable advisor to the king himself. As all high-born boys were bade, Severan became a disciple of Fyrzon the Steadfast, where he learned honor and the word of his god [priest]. When the priests there anointed him at the end of his trials, he entered the Order of the Battered Shield, the King’s most trusted circle of guardians, and highest of all knights in Satarla [knight]. Alas, misfortune and woe fell upon the Order when its leaders were accused of corruption. So deep did the malfeasance run that few escaped its taint. The order was broken and its members were hanged or driven away in dishonor. For years since, Severan has wandered far and wide to try and restore the order’s once great standing by protecting the oppressed accordingly an obsolete code [vagabond].

Trappings.
Born among a tribe of reclusive men of uncertain origin, Jafar excelled in jungle-craft and hunting like many of his kind [hunter]. Even among his kin, Jafar had something feral within him more akin to the beasts he frequently hunted, even attracting unto himself a shaggy wolf named Graul [beastmaster]. He traveled often deep into the jungle where his brave kin dared not go, delving secrets, and picking up bits of ancient poetry and knowledge some say he either found amongst forgotten ruins, or was given him by strange spirits [minstrel]. Nonetheless, he oft passes on such esoteric knowledge and wisdom which has proven useful countless times among his closest friends. Not wholly wild, and actual possessed of an out of place trustworthiness and likability, he is friendly to city folk, picking up gossip and swapping tales and learning new languages [trader]. He has a hatred of sorcery, the bloodless, and other unnatural summoning. As such, his tolerance of Raz-Thuzzul wears thin.

Strength 0, Agility 2, Mind 1, Appeal 1
Melee 1, Ranged 1, Defense 2, Initiative 0
Barbarian 0, Slave 0, Serving Wench 2, Mercenary 2
Origin. Axos
Languages. Axian, Lemurian, Shamite
Traits. Born Athlete
Lifeblood. 10
Hero Points. 5
Trappings.
Runa, a fair-skinned Axian, was a shaman’s daughter among the tribe of the black bear in the foothills of the Axos [barbarian]. She wasn’t old before her village was raided, and she was taken as a slave [slave]. Sold, she worked for an owner of a tavern in Shamballah [serving wench]. Her master was very abusive toward her. It so happened that the first time Jafar saw her was in this tavern taking her lumps. Jafar intervened, slew the owner, and helped Runa escape. She immediately fell in love with him, but he rebuked her as an empty-headed girl. Since, she learned the art of warfare and worked several hard years  among mercenary companies, including the infamous Legion of the Eldaphon [mercenary]. Reuniting again with her friends, they begin to see how she has changed into every bit their match in arms and equally fearless.

Strength 0, Agility 1, Mind 4, Appeal -1
Melee 1, Ranged 0, Defense 3, Initiative 0
Slave 0, Vagabond 0, Sorcerer 3, Alchemist 1
Origin. Zalut
Languages. Beshaari, Giantish, Lemurian, Malakutian, Sea Tongue, Sorceric (read/write), Valgardish, Ygddari
Traits. Arrogant, Cravings, Delicate, Distinctive Appearance, Magic of the Sorcerer-Kings, Obsession (Power), Power of the Void, Unsettling
Lifeblood. 8
Hero Points. 5
Arcane Points. 15
Craft Points. 1
Trappings.
Raz-Thuzzul (formerly Rastil) is a pale and black-garbed figure of frightening aspect when un-cowled. He has few memories of his youth before he was a slave upon Zalut [slave]. And how his masters had tormented him! He escaped the Sorcerer’s Isle by luck and wits to wander the ports of Lemuria [vagabond]. He chanced to meet a few friends during his travels and even lent them what aid he could. A turn of fate graced him. He chanced into his old slave-master again at the Port of the Sea Lords and there slew him. He returned under his master’s guise to Zalut and learned sorcery and dark secrets through the many works his master owned, as well as through mentorship under a powerful servant. By agreement with this fell being, he became one of the morgul, exchanging his soul for the power he sought [sorcerer]. Still in the early changes of this transformation, he can still pass as a man. However the urges of blood have began to creep over him. He mastered a concoction that grants a momentary relief from his urges. Animals and children sharing his company exhibit fear or anxiousness.

The four heroes have crossed paths many times. Their trials and tribulations have oft centered around the twenty gods of Lemuria. The debates continue on whether or not only the dark ones truly exist, for the twenty have not directly intervened in the betterment of man for more than an age. Were the names and natures of the gods merely myth only to give man a sense of hope that not all was dark or lost? The legends of the  orb-blade wielded by the previous age’s heroes are the true evidence of what connects the gods to Lemuria. But did such heroes and such a blade truly ever exist?

For the last five years, these old companions ventured on their individual quests to answer these questions. And now the time of their reunion drew nigh…

In my next post, I begin episode 1, The Road Travels East.
Posted by Rory Bracebuckle at 12:41 AM