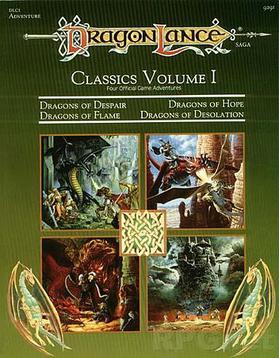 March is Solo a Module Month (SAMM). For my 2019 #SoloAModule month entry, my thoughts dwell upon Dragonlance. How does one solo a module? Last year, although I hadn’t gotten far, I used Mythic to determine whether established setups as presented in the book were true or not. That way, some parts might be recognizable, but the new life it took on maintained the element of surprise.

This year, I want to find a way to use Untold: Adventures Await. This product guides a structure to create an episodic story game. The Dragonlance modules are very railroaded, by design. I’ve approached this setting (especially with regard to the original trilogy) multiple times with very limited success. I always muse over where I go wrong, and chalk it up to the nonmalleable nature of the setting’s established canon. Other than my readership of the first trilogy, I’m also not very savvy on the intimate details of Krynn.

The idea then hit me… what happens if I use Untold with Dragonlance, using each module chapter to present a context of interpretation for each episode? Furthermore, to free myself from setting paralysis, what happens if I adapt the story and its themes to a wholly different world? Now that’s an idea I can easily work with.

Dragonlance is about heroic action and ebbing a new tide of evil. It’s also about the gods, once regarded as dead, returning in an active way, and holy relics being bestowed upon unlikely heroes in their fight against evil. My current go-to is Barbarians of Lemuria. What if I adapt the story to Lemuria? Of course, just by its strong sword and sorcery roots, it’s going to be quite a different beast. Other than both being fantasy worlds, there aren’t too many similarities between them. Nonetheless, Lemuria’s first age of man has the orb blade made of ore cast down from the heavens. Could this be the analogue of the blue crystal staff or the legendary namesake weapons? Dragonlance has the return of mythical dragons and the rise of a strange new race of evil draconic progeny. There are plenty of critters that can take these roles in Lemuria, including some lesser form of demons.

Using each module chapter’s themes, ideas, and generally character roles, these elements will form a very powerful context for interpreting Untold scene events and help direct questions. If some of Dragonlance gets retold whole-cloth in the new setting, so be it. At least its new cladding will breathe in new life. However, I know that won’t happen. Invariably, it’ll be its own thing. Nonetheless, I’ll be drawing heavily from the module’s events, chapter for episode, thus helping to drive the project.

Will I make through a module? Likely not, but we’ll see if I can sustain a few episodes and enjoy the twists and turns enough to see how recognizable the original will be.
Posted by Rory Bracebuckle at 1:06 PM