Continuing on with the “Return of the Shattered Mail” campaign. In part 6, we discovered that the petty-thief, Stordfast, met an untimely end and has released the demon bound within the mask. Our heroine has no clue as to these events, but the fate of her friends lays in recovering and delivering the mask. Things look dire indeed!

When leaving town, does Mitra meet up with Redbeard? DoF: 6
A good result means that she gets what she wants — she collects her horse and heads out

Mitra collected Umbril and fortunately had the coin now to pay the ostler. She cast wary eyes over her shoulder to make sure she could escape from town alone and unseen. Tymora shined upon her. She saw no sign of either the militia men, the stableboy from the watering hole in which the two had been struck by ill luck, or Redbeard.

With everything that had derailed her quest, she was truly desperate and at an impasse. The outlaw she sought could have escaped to any of the four winds. She had no leads, only the vaguest inkling of what the lad looked like, and few guesses as to what his motivation or direction might be. The only guess she could make was that Stordfast might head towards the biggest city from which he could fence the exotic item. That meant Baldur’s Gate. It was desperate, but it was her only course, unless the road itself might reveal more clues.

Are there any signs yet of an approaching army? DoF: 1
1 means the worst possible scenario!

Mitra saddled up and clicked her steed forward. She headed for the northeast of town — the side to which she was closest. That took her further from the road for which she intended to make, but she wished the quickest and most direct route out of town. One could cut across country easily and circumvent the town, she reasoned. 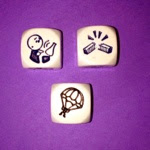 Now for some Cubes! What do these mean? Cause a disturbance? Step on a twig? Both of these events are usually inadvertent. What would be the same event on a grander scale? Perhaps an advance warg rider scouting party from the horde have come to get recon on the town. One of them has a particularly unruly beast, gets spotted and gets thrown. The others descend upon the warrioress.

Mitra rode beyond the last outbuildings...

...in the lesser populated north side along an old dusty miner’s road. She knew she should be feeling somewhat freer, but something weighed heavy upon her heart…something not immediately explained by her impending plight alone — something she could only feel in her gut, but not put her finger on. That was a feeling she had come to trust, one that kept her alive amid a long career of frequent peril.

She had the urge to look up at some of the line of low rugged hills that frowned upon the town as she continued forward. Lost in her thoughts, something grabbed her attention. She heard a noise like a shriek and the snarl of a beast. Then she spied movement.

Along the ridge of hills at her ten o’clock, a couple quick forms darted beyond sight. She hadn’t had much chance to see them, but she swore they were mounted. Suddenly, from another rocky blind, she saw a goblin or orc on the ground facing a massive lupine monster — undoubtedly a warg. He seemed to be disciplining the creature. The hideous hound simply bit the shrieking rider in two. It let up a howl and darted away.

Advance riders of the enemy was upon the town!

She swore under her breath. From around another bend came two more of the things. Red tongues lolled out of the beasts’ fanged mouths as the red-eyed monsters flew down toward her like a storm. Their riders bore long javelins ready to throw. It seemed the spies were bent on killing the lone witness who was only now aware of their presence. Umbril snorted and whinnied, not so much out of fear as most horses would, but a desire to meet the challenge. He was a war-trained mount, and a fine one at that.

Mitra drew her sword. Behind her, the town was perhaps a mile or more distant, while the enemy riders were the same distance but closing fast. Her warrior instincts kicked and and she spurred her steed forward to meet them. Had she turned and fled, they would surely have brought her down. She would not so quickly be silenced. With an oath to Tempus, she charged.

Does she avoid their throws? Yes, but…

She held her sword out and bore down, the gap closing rapidly. Then, the expected throws came. She veered directly into their midst. One of the missiles was overthrown and disappeared overhead, but the other rider held his throw after feigning to follow his partner’s example and broke free of the formation, quickly veering around to flank her. The second rider came up fast on her offhanded flank.

Does she maneuver to an offensive position against the flanking one? No, and…

She tried to wheel Umbril around, but the wolf-rider was relentless and closed before she had control. The great wolf latched onto Umbril’s foreleg, trying to pull him down.

Does Mitra keep her seat? Yes, but…

Mitra managed to stay in her seat, but it was nearly all she could manage. The horse’s terrified scream, snarling of the wolf-monster, and clash of steel filled the air. The two were locked, and now the first rider had drawn his sidearm, a wicked curved blade, and wheeled around to close in for the kill.

Does Mitra successfully leap into the seat of her opponent? No, but...
+1 FU Point

The warrior woman girdled herself. She was to be skewered on the charging rider’s javelin, now wielded like a lance if she was to do nothing to break the impasse. She threw herself at the rider away from her sword arm, leaping out of her own saddle and onto the back of her opponent. She missed her mark, tumbling to the ground, but she pulled the squealing rider with her and put an obstacle between herself and the second approaching rider.

Does she finish off the grounded rider? Yes, but...
Does Umbril fight off his attacker? No, and...

Getting to her feet, she faced off with the grounded rider. Her footwork was the quicker, and his eyes widened as ten inches of steel plunged through his boiled leather jerkin. From behind, she heard Umbril squeal in terror. The wolf managed to bring the great horse down and now ripped flesh from his great muscled neck. Leaping over the two forms of wolf and horse struggling in the dirt came the second rider. His javelin cut through the intervening space with astonishing power.

Does she avoid the weapon? Yes...

Mitra twisted at the last moment. The spearlike shaft missed her midsection by mere inches, embedding itself into the earth next to the rider’s fallen friend. Now without weapon, Mitra sneered at the rider as he and his snarling steed came forward.

She darted to the left and crouched. The warg’s own momentum impaled it on the warrioress’s sword, dropping the rider with a sickening crunch. In moments she recovered her weapon from the dead monster and finished off the broken rider. Next she turned her attention to the beast still gorging itself on Umbril’s flesh, uncaring of the danger around it. With tears in her eyes, she plunged her blade into the sinewy backside of the evil thing.

Although she lived and had vanquished her foes, clearly Tymora did not favor her...


Okay, some harrowing moments there. Rolling so many 1’s and 5’s. What next for Mitra? Will she go back and warn the town? Will she continue on regardless of the danger that looms over Soubar even earlier than anyone had expected? What about the demon? Where does it set its sights, and for what purpose? What about Xavier Zalibar? Does he know of these events? If so, what does he propose to do about them. Many questions! Only time will tell...
Posted by Rory Bracebuckle at 3:19 PM