Last time, Mitra recovered her beloved black steed, and a few of her coins, but was still without her mask. On the trail of Stordfast, the alleged thief, she must guess which direction he went. In the meantime, the hordes of Dragonspear threaten to break like a tital wave over the settlements of the Sword Coast. Things look ill for our heroine!

To help, here's a summary:
And once again, our heroine:

However, before we continue her story, we follow the mask with a set of freely interpreted Cubes: 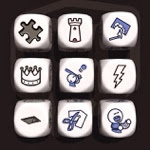 A lone cloaked figure clutched something...


...against his belly as he lurched forward. He was weak and confused. Lightning struck again, the skies boomed, and the dark heavens finally released torrents of heavy cold rain. Hungry and aimless, Stordfast sought for refuge against the elements. Off the road, the barrens were devoid of much of any cover. Trees were stunted and provided little foliage. Cursing the gods, the young man scanned the horizons. Suddenly, the broken line of a ruin in the distance caught his eye. You will find safety there, he said to himself. He cocked his head to one side. ‘I’ will find safety, he corrected.

Forward he went. The distance was greater than first appeared. For the better part of an hour he waded through soggy muck and stinking bogs to get to the place. When he climbed out of a pool and onto dry land, he lay at the foot of a once great tower. Little else remained of the attached keep. The young Calashite cared little. He only wanted shelter.

Panting, he tossed himself through a vacant crumbling doorframe overgrown with bramble and into the black stony recesses. He was exhausted, sodden, cold, and famished. You will find food here, he said to himself, or had he?

Turning to examine his surroundings, Stordfast saw a round room choked with fallen stone and debris. An empty windowframe was partially filled in by a pear tree. He wandered to the window. The tree was bent, laden with ripened fruit. The young thief eagerly picked four and devoured them, juice running down his fingers. They were sweet!

His most immediate urge taken care of, he next turned his attention to warmth. He scanned the darker recesses of the round chamber. As if waiting for him, a lantern, tinder, flint, steel, and fuel sat on the floor as if left by someone. He examined the items. They were dusty and smeared from ages of disuse. He hastily lit the lantern and tried to warm his hands against the little flame. He removed his sodden cloak to dry and rubbed his arms.

As he stood trying to warm himself, he spied a dark hole partially exposed under a collapsed stone. Curiosity got the best of him.

You will find power and riches within, he said to himself...or had he?

He picked up his newfound lantern and investigated the corner. Now he could see a winding staircase descending into blackness. The stone was easily removed. He stared down within the mysterious, frightening, and yet promising depths in awe. He descended.

He arrived at a landing. His dim flickering light illuminated little about him. It was dark with very close air. A sense of dreadful, watchful malice filled the air. Stordfast began trembling.

You are well, he said to himself. Fear not, he added with an urge to move forward. Rather than from his own mind, the thought seemed to emanate from his hip where the heavy object hung that he had stolen from the warrior woman rather from his head. Yet, too filled with wonder, he seemed not to notice. The passage moved only forward.

Shuffling along, he came to a seemingly dead end. The short passage seemed to lead nowhere. A strange crest medallion was mounted on the wall. Leaning against the wall was an old iron bar. Judging by the scratch marks near it, someone had tried to pry the medallion loose. Immediately, the old feelings of excitement filled his breast at the thought of filching an item of great beauty and value.

He picked of the bar and tried to pry. However, the stone medallion was stuck fast. After many attempts, the young Calashite grew frustrated and began banging on the wall. By some chance, he struck something that moved. Suddenly the wall gave in and swung away on hidden hinges. It was a secret door!

He fetched his lantern again and peered within the space beyond. It looked to be some treasure room! Glittering coins were strewn about...and jewels! He was rich beyond reckoning! His luck had turned astonishingly for the better.

He danced about and scooped up the shiny valuables, letting them fall between his fingers. He enjoyed feeling their weight, and the feel of their cold, smooth surfaces. He took joy in the clatter and jingle as they fell to the floor, overflowing with abundance.

His eye was drawn deeper within the treasure room. In the back, set upon a dais of three steps was a high-backed chair. A throne! Unlike the other items, the chair was not lavish or bejeweled...it was old, and somehow twisted. The leather looked like old desiccated skin — stretched and brittle. It was black and drab and somehow terrible beyond what eyes alone could see. It was also large...a grown man would appear small upon it.

The voice came again. Sit on the throne, it said. This time, Stordfast did not confuse it with his own thoughts. He was flooded by fear. He turned to leave, but the voice repeated. The voice was deep and commanding. So powerful was it that Stordfast might have torn off his own face with his hands if the voice so commanded. Sit!

Drawn, the lad approached irresistibly. He climbed the stairs and stood before the seat. It looked like a dead thing still possessed of a malevolent animating force. But, it was just a chair.

Slowly, he turned and lowered himself. The feel of the old leather was sickening. The smell of decay was in his nostrils. There was old evil within it...terrible, ancient, and unearthly. As though bound into place, Stordfast could not move.

Put on the mask, came the voice. The lad's hand moved to the bag at his hip. Fingers undid bindings and the hideous visage stared at him, eye holes alight with greenish flame. Put on the mask!

Stordfast did as he was compelled to do. As if a fine-fighting piece of a jigsaw puzzle, it seemed perfectly contoured to his face. Suddenly, it fused to his skin with painful burning. He cried a shriek of agony, muffled behind gold. Green flame wreathed his body and the throne upon which he was set. He convulsed and wrenched painfully, screaming, but he could not rip the mask free, nor get up from the hideous seat. His skin rippled and bubbled as though the green flame boiled within him. His shrieks continued, until his own skin ripped open along hundreds of fissures and cuts as though it were mere paper to be torn. Revealed underneath was a demonic form with fearsome face of gold that shed the shell of flesh that was only moments before, Stordfast.

Tune in next time... Mitra wants to quietly pay the hostler, collect her horse and begin her search. Does she lose Redbeard to continue her doomed quest? Does she find sign of Stordfast’s trail? Do the hordes of Dragonspear overtake her? Does she meet the horror unwittingly released by the young Calashite?

These answers and more await...
Posted by Rory Bracebuckle at 12:12 AM