As promised, I will use this blog to post some of my actual plays. I won’t say “reports”, because these aren’t summaries, but rather represent a “write as you go” approach.
This first one features a recurring character that I resurrected for the purpose of solo play. For more thoughts about old characters and plots, refer to my last post, the Ghosts of Gaming Past. This particular character was inspired by the old The Moonsea campaign accessory for the Forgotten Realms, way back in the 2E era. According to the accessory, the Drowsbanes were an important clan of the city of Sullaspryn until the dark elves attacked, sacking the city, leaving the family mostly decimated and scattered. The set suggested that perhaps only one remained of the family.

My ruleset, which I cannot recommend enough, is Nathan Russell’s elegant yet robust FU rpg. A game in which one can make up a character in minutes (NPCs in mere seconds) and resolve entire conflicts in a single simple roll, you ask? Yes, it is a busy gamer’s dream. Along with it, I bolted on John Fiore’s the 9Q’s system for plot direction and GM emulation, which was bran new at the time. This was a play test of JF’s new system.

The protagonist went through many different versions over the adventures. FU is one that tempts tweaking and hacking. However, my most recent version is without many modifications:

Descriptors: Veteran Mage, Swordplay, Perceptive, Principled
Gear: Enduring Elf-blade, Light Elf-corselet
FU Points: 2
Conditions: None
Heroic Motivation: Still in the service of his uncle, Messrym Drowsbane, a noted wizard in Mulmaster, Tengrym’s master has learned that the Seeing Stone of Indril, thought to have been lost under the Moonsea may be in the ruins of Zhentil Keep. Tengrym is sent to find it.
The random idea generator I used for this adventure was Rory’s Story Cubes. For scenes 1-3, I rolled: 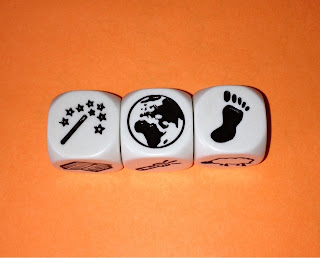 Our story begins with Tengrym, our intrepid half-elf loner, a swordsman and apprentice magician, sent out to find Indril’s Crystal, a famed Seeing Stone thought to have been lost under the waves of the Moonsea. Now, Messrym, Tengrym’s sorcerous uncle in Mulmaster, believes it may be in the tower of Zaryn, an infamous black wizard of Zhentil Keep. Now dead, and the city in ruins, Messrym sends his young apprentice to seek it.

After an uneventful trip across the Moonsea, Tengrym is deposited at the quays of the ruined city. The ship departs, unwilling to be harried by pirates who haunt the docks of the place now.

Tengrym quickly gets his bearings and slips quietly through the occupied harbor to climb into the dangerous center, where Zaryn’s tower lies. He encounters no one on the way. Upon arrival, he is surprised to see a man in black robes standing just outside the stone walls of the partially ruined tower. Through the yawning gate, Tengrym can see shadowed indistinct figures milling about in the bailey.

Before he can hide or act, the robed figure turns, revealing a gaunt man with a wiry gray beard.

“No one of consequence,” answers Tengrym.

“Not so!” the man replies. “I am the wizard Gelfan—and that means I am no fool. In all likelihood, you are here for the same reason as I. And I tolerate no rivals in this endeavor. Minions! To me!”

With that, the figures in the tower yard come ambling out of the shadows and into the moonlight, revealing skeletal faces. Animated corpses descend on Tengrym!

Animated Corpses
Descriptors: strength of the living dead, nothing but old bones, slow and witless

Not wishing to get into a fight, the warrior is met face-to-face by the wizard’s skeletal henchmen before he can react. Steel rings out in the night air as the first few warriors clamber over one another to get at the half-elf. Despite his expert prowess with the sword, Tengrym is ineffectual, and his blows do little to deter the animated corpses. The numbers are too great, and he stumbles backwards taking a shallow cut by a rusty axe to his shoulder.
The swordsman picks himself up off the cobbles and scrambles to get away, but the numbers are overwhelming. He looses most of the group behind him in the darkness, but still two or three stragglers follow closely after him, groping with outstretched claws and jaws agape with voiceless shrieks.

Knowing something of the nature of animated corpses, and their mindless qualities, Tengrym doesn’t fear more coming to seek him until he again threatens the wizard that commands them. He looks at his shoulder, but sees that the wound is not deep and should not trouble him permanently. He quickly binds the wound with a swath of cloth.

Not far away, the wizard recalls his remaining flock of skeletal warriors to him. Three are missing, confirming to the necromancer that he is dealing with someone with no shortage of skill and uncertain ability. Not wishing to meddle with any more nuisance, he draws his sleeves up and chants an arcane and dangerous spell.

“Come to me, fiends of the shadow realm!”

A dark, fiery-rimmed rift opens before him, and within it, dozens of shadowy servants appear. An evil red light marks their eyes within the insubstance of their bodies.

“Come to me! Find this intruder who dogs my steps! Chase him away, or slay him if it is within your power!”

In the meantime, Tengrym catches his breath, and thinks about what next step to take. Suddenly, the night is pierced by the horrific wails of some otherworldly thing. It is a call of terror. Answering it come several other unworldly shrieks. The half-elf’s heart stops with an icy shudder. Fear wells up within him like an uncontrollable force. If he had been able to control this force, he might have reasoned what it was that chased him.

Without thinking, he runs. He runs without direction or sense, only to flee the terrible things that howl and wail above his head and to his flanks. He runs to loose that sound. Through a maze of dark streets he flies.

Soon, he becomes senseless as to his direction and looses footing and slides down a broken stair to an old plaza with a broken font. The shrieks recede, but he is lost and unable to find his bearings. Have I failed already? he wonders. Now that the fear abates, he knows that the wizard summoned shadow creatures which do not really have much power to affect him. Still, the necromancer proved himself to be a formidable foe.

Tengrym looks at the skies, but a veil of clouds hide the stars. He cannot steer via that method. He tries to retrace his steps, following a direction upward as much as possible back to the broken tower. After much time picking his way among the broken winding streets, nothing looks familiar. However, he comes to another plaza that grants a better vantage. Not far away, he sees the tower of Zaryn. He had inadvertently returned by a different route.

Tengrym quickens his pace with quiet footsteps. He notes the direction and does his best to find a track more or less directly that way. However, the ruins of Zhentil Keep are not empty, though no living man now resides in the old acropolis. Other things now make it their home, and the shrieks of the shadow-things that pursue Tengrym awakes many things from their early evening slumber. From the hollow windows of abandoned buildings, something awakened watches as a lone figure passes below.

It is a thing of the night, a walking shadow of what was once a merchant. That man—Silodan had been his name in life—was given the opportunity to extend his life. Eternal life meant that he could continue his way of exploitation, greed, and extravagance. The thing that sired him sapped him of his lifeblood and replaced it was a few drops of his own. He died, but awoke something wholly different. Since his blood was diluted and he partook of other undead things to try and augment his power, Silodan became something less evolved than the vampires that retain their intellect, or even civility. His craving for blood drove all sanity and intelligence from his mind. His merchant empire was quickly forgotten, all wealth squandered. His contacts shunned him, and he no longer hid his true nature. That was years ago…

He is now a monster.

The monster lived in the ruins even after men fled during the heresies that had burned its greatness and banished its once opulent rulers. He is now a bloodthirsty hound that haunts its empty streets, somehow still attracted to his old habitat where memory lingers on the edge of shadow.

Tengrym is completely oblivious to things around him and behind him as he keeps his sights forward on the looming tower, expecting conflict from that direction. He is taken completely by surprise as something silent and fast comes up like a shadow behind him to hamstring him. Something instinctual warns him of dire peril in the last moment—either feeling the change of air current tugging at his hair, or some instinctual recognition of the revolting horror behind him—and he rolls out of the way and rights himself again on his feet, his sword out in a flash. Before him, the swordsman sees a fanged perversion of a man, covered with tattered moth-eaten garb, capped by lank dark hair, and baleful yellow eyes, like that of a wolf. The thing’s fangs are bared and it lunges at him, seeking to find the half-elf’s neck.

Perhaps living in wretchedness for years had caused the thing to forget wary skilled foes and to protect itself. It had no use of tactics. Seeing this, Tengrym keeps his guard up, using his sword to keep the thing at bay. Like he anticipated, the thing drives itself recklessly into his steel guard, scoring itself in numerous gaping wounds. Still, the monster has no regard for itself, pressing the attack by sheer ferocity. A few more deft moves dismembers the thing, sending its corpse to fall to the old cobblestones flailing like a headless chicken.

Tengrym backs away, but sees that the monster is truly dead. He looks at the doorways and windows that gape onto the streets warily, wondering what other monsters lurk within the seemingly empty buildings. He shudders and presses on quietly, keeping his blade ready.

Tomorrow, part two…
Posted by Rory Bracebuckle at 10:21 AM