And now for the final installment and exciting conclusion of Indril’s Crystal. Continued from here…

The final set of Cubes rolled for the last three scenes are: 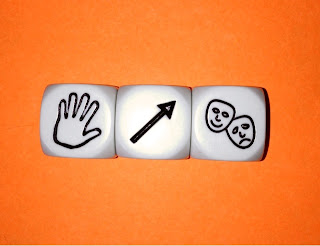 Not a moment before Tengrym makes the landing to the pool, the wizard Gelfan alights himself after a short magical flight over the water.

“You!” he exclaims, spittle flying from enraged lips. The wizard looks and sees the full sack at Tengrym’s hip, heavily laden by some obviously round, smooth shape. “Thief!”
All in a moment, Tengrym takes in the scene. The wizard has a wand in one hand, and a strange crystal device in the other. Inside the small crystal is a green amorphous glowing blob that dances. The flailing, writhing limbs in the water keep a wide radius away from the holder of that crystal. In a moment, Tengrym guesses it’s purpose and launches into action.

Tengrym latches onto the crystal in the wizard’s hand and kicks out, intending to topple him over into the murky water. Though not strong of limb, the wizard is tenacious and grapples with the swordsman, unwilling to let go of the stone. Too winded to attempt any magic, and not free to swing his sword, the half-elf resorts to physical battery to loosen the wizard’s determined grip. With a final push of effort, Tengrym wrests the crystal from Gelfan’s bony grip, pushing him into the water. However, bent on nothing but absolute success, the wizard latches onto Tengrym’s ringlet cuirass, pulling him in with him. Loosing his balance, Tengrym goes into the water as well.

The writhing tentacles search, but still keep a safe distance due to the aura emanating from the stone in Tengrym’s hand. From behind, the surviving skeletal warriors pour from the corridor onto the landing wading in recklessly to hack at the “guardian” of the stone. With the controlling orb still in hand, Tengrym turns to haul himself up on the raft to make his escape.

However, he cannot get far before Gelfan comes up gasping for air. The necromancer aims his wand at the escaping half-elf and utters a single command word. As Tengrym stands and begins hauling himself away from the fray, a black blast of magical energy sears the flesh on his backside. Howling in pain, he continues pulling himself clear despite the attack. Just as Gelfan readies another killing blast, the tentacles feel out the now defenseless disturbers in the water near the landing by the treasure vault. Within moments, a frothing maelstrom erupts around the wizard. His skeletal minions are pulled beneath the surface, and Gelfan fights to pull himself onto dry ground.

As Tengrym lands safely on the other side, he hears the shrieks of the wizard above the thrashing of wet, rubbery limbs and old bones in the water.

“Curse you! Curse you to the Abyss!”

Tengrym flies from the ruin in haste, giddy with delight that his prize is successfully bought. The night is tense, but he is not harried nor confronted, nor does he hear word or sign of Gelfan behind him. Quickly, he makes his way from the acropolis down to the harbor, which is inhabited by outlaws and pirates.

Unable to find passage aboard any vessel from the port, he bribes some scoundrels to boat him across the Tesh aboard an old dinghy. Safely across, he puts many miles behind him and heads to Yûlash to secure a ship bound for Mulmaster. Off the old road and no longer within sight of Zhentil Keep, he at last finds a secluded hollow to camp for the night, bathing in a spring to sooth the wound caused by the wizard’s sorcerous blast. Fortunately, the effects quickly subside.

The next morning, he sets out along the few remaining miles to the Hillsfar-held city. He passes a caravan going the opposite way bound for Voonlar, inquiring about news, when suddenly, someone in the caravan points to the sky.

Tengrym looks up and sees the black robes, now in tatters, of the wrathful Gelfan descending from the sky with his wand extended. It looks as though the old wizard did not fare well in the tunnels under the tower. The chaos is complete as the company of teamsters and cavalry kick up earth and dust trying to organize a line of defense. The half-elf uses the time to put a spell of warding upon himself.

Then, as the wizard lands, preparing a blast of sorcery, Tengrym rushes the man to end the threat once and for all before he can loose the arcane energy. However, the blast hits the swordsman squarely, only partially blocked by the ward he had just placed to protect himself. But perhaps it still saved him. That bolt might have felled an ox. Tengrym grunts through the pain and closes the distance.

The wizard’s eyes open wide as the swordsman looms up and thrusts his blade through his opponent’s abdomen, ending the brief struggle. The onlooking men stare in astonishment as Tengrym sets the wizard down, gazing with regret at the dying man crumpled at his feet. The train does not linger. After building a shallow grave and uttering a prayer to Selûne, the half-elf swordsman continues on to Yûlash.

Tengrym eventually makes his way back to Mulmaster, reporting back with the successful retrieval of Indril’s Crystal, and more loot besides as reward for himself. It was a dangerous venture, but his skill, as well as Tymora’s protective gaze, kept him safe and made him victorious in the end. Tengrym’s uncle, an arch-mage of some note is also pleased and locks himself in his conjury to study the secrets of the famous seeing stone.

Although pleased, Tengrym is also remorseful about being forced to kill Gelfan in the end. However, it was a kill or be killed situation—and had he let the necromancer live, Gelfan certainly would have hunted Tengrym down.

Even more remorseful is Gelfan’s apprentice, a young and ambitious man who already has a considerable presence in the Moonsea and lands further west of Cormyr, accomplishments, and holdings of his own. In fact, the wizard Semmemon is now a far more capable and accomplished sorcerer than his master, having later studied with lord Manshoon, and now holding great power among the feared Zhentarim.

Semmemon stands over his former master’s grave, clenching a fist. His magic had led him to the spot where his master’s corpse rots. There will yet be time for vengeance, he thinks.
But that is another tale…

This adventure took approximately six hours to complete, which included the writing phase. For two years, I am even more convinced that the Nine Questions system is a great tool for the solo rpg'er. Most who have tried solo adventures know of Mythic, but the 9Q’s delivers every time. I can fully rely that the adventure will come to some sort of conclusion, which keeps the process desirable and smooth.
Posted by Rory Bracebuckle at 11:57 AM