I haven't posted hear almost at all recently. I'm still puttering with solo play projects and enjoying reading what others are doing with their solo games.

However, I had a moment of inspiration and came up with something new. It's simple, but it's been helping me to shape my solo gaming sessions. Introducing, Impetus... 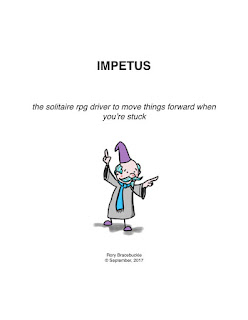 It’s a doohickey for playing tabletop role-play games all alone. It’s a tool that gets you un-stuck when you hit a roadblock. A simple thing that gives a nudge when you need it. In the solo gaming niche, they might call this a driver.

You see, when you sit down to play an rpg, whether it’s that funny game they played at the beginning of E.T., or some other game with books, dice, and pencils, and you’re alone, you need something to help out. Something so that you’re not taking part in a fully scripted premeditated storyline invented by you.

Impetus is essentially a list of universal plot twists combined with a random idea to produce spontaneous events to prod your story along with little fuss and effort.

It's also free.
Posted by Rory Bracebuckle at 10:47 AM