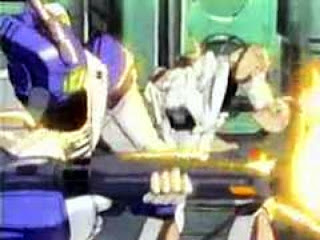 Continuing from here, this is the actual write-up portion of my Mecha game set in the Robotech Universe.

Alert Status: Yellow
Location: Mars base, Port Justice, after a raid and distress call.
Threats/Severity: Long range scans indicate widespread destruction, but no Hostiles. All communication has ceased, and it is unknown whether there are any survivors. There are little but questions.
Objective: Recover the central communications relay and transcript repository.
Details: The mission is covert, so maintaining radio silence is a priority. Fighters will be lightly armed, and engagement with enemy Hostiles must be avoided. Evade, and engage only if necessary. Lt. Cody Tisch will serve as mission leader in this three-man team.
After the mission briefing, Bryce saluted Major Albright. The three teammates, including Jeff Pardo, grinned at one another. For Bryce, this was his first real mission other than run-of-the-mill ones.
The ARMD-7 with a crew of 600 with twenty-four pilots, each sharing one of its twelve Veritech fighters neared Phobos, where it would keep at a high orbit. The three members of the Vermillion squadron were shuttled to their waiting fighters.
The light was green and the fighters scrambled. Once in space, the three pilots gave hand signals from their cockpits of all systems go and formed up into a tight formation. At this distance, ETA was two hours at cruising speed. They readied their short-range radios which they could use only at need. The crew of ARMD-7 would not hear their communications.
“Why do you think they want this to be so secret?” asked Rogers after a stint.
“Beats me,” answered Pardo.
“No chatter, boys,” chided Lt. Tisch. Cody was the experienced one. Both Rogers and Pardo were rookies. “From here on out, keep quiet and keep your eyes peeled. Anything can yet happen…”

~the twist~
An hour into the flight, Pardo broke silence. “I’m getting some readings. Is it me, or is that a heavy cruiser parked over in that asteroid belt?”
Tisch responded, “You better hope not. Keep your eye on it…”
“Shouldn’t we warn command?” asked Bryce.
“Keep long wave silence. We continue on to the objective. Command wants those transcripts. Out…”

The three fighters streaked through space and neared the thin atmosphere of Mars. They made entry twelve hundred kilometers from the base site to come in by stealth.
As their altitude lowered, they soared through the desert mountains of the Red Planet. Suddenly, something came over Bryce’s sensors, but abruptly disappeared. Whatever it was, it was grounded, little more than a brief movement.
“Lieutenant,” he crackled over the short-range, “I could swear something just moved down there. I got a bad feeling about this…”
“Kid,” answered Tisch, “I had a bad feeling the moment you graduated from the academy! But keep your wits about you. It might be a battlepod, or survivors.”
“I can take a swing-by,” offered Bryce.
“That’s a negative, Rogers. We got to stay on task…just keep your eyes open.”
The three continued, coming over a ridge. Beyond that was a dry ocean bed where the base was located. The site was still smoldering. It was utterly destroyed. There was no movement below, whatsoever. No power registered.
The team flew at high speed and low altitude.
“Keep tight,” said Tisch. “We’ll take one more pass to make sure we don’t land in a nest of hornets, then we’ll set down close to the command tower.”
Both Bryce and Jeff were astonished and horrified. “How many were here?” asked Jeff.
“At least two-thousand,” answered Cody. “Button those lips, boys.”
They completed their second circle, picking up no movement or threats. The two rookies followed Cody in, converting to guardian mode to touch down. In formation, the three faced out like a triangle, seeking any hostiles.
“Clear!” all three checked in.
“Okay, convert to battloid mode and follow me in,” said Lt. Tisch.
Three massive robots stepped forward toward the ruined command center. They entered a loading area with a shorn-off door. Inside, they encountered a heavy blast door blocking the way to points further inside.
“As I figured,” said Tisch. “There maybe survivors in here. You two, cover me while I get this door open.”
Bryce and Jeff stood guard while Cody activated the security interface module on his mecha’s right arm. The two guarding pilots couldn’t see the shadow of movement from their vantage point, but amidst the rubble, things moved about. Zentraedi battle pods closed in.
As Lt. Tisch worked, a charge built up and fried the terminal. A second blast door dropped suddenly down in front of the first.
“Damn!” he said. “The terminal was boobie-trapped. We’re going to have to do this the hard way. Pardo, keep guard. Bryce, you’ve got extra ammunition. Take out the door!”
Bryce turned and opened fire at point blank range. Thousands of rounds blazed in three seconds. The doors became smoking slag.
Outside, more battlepods gathered. However, their commanding officer held back their attack. “We must wait for them to return out of the command tower. Hold fire!” and baritone alien voice said.
The three pilots stepped forward as the smoke and debris cleared. Bryce was the first to step forward. “Evasive maneuvers!” he called over his com. Before him was a hastily rigged display of short-range missile racks. The trigger was tripped, and all at once, the things fired.
The explosions were terrible, and destroyed much of what was left in that corner of the building. Bryce’s mecha was knocked aside like a toy where he landed against the steel supports of the building. The shock dazed him in his cockpit momentarily, but his screen went black. A few moments later, the screen flickered back on. He saw a ruined loading area. Lt. Tisch’s voice came over the com.
“Is everyone alright?”
“I think so,” answered Bryce. “My systems shut down…I think I’m on a backup circuit, but all appears to be normal.”
Jeff was the last to answer. “I’m hit, but still in action.”
Cody whistled. “That was close! There was enough explosive power to take out a whole squadron. I’m guessing the passage choked out many of them. I’ve got damage, but it looks like nothing that can’t be repaired.”
“Well, let’s handle that now,” suggested Bryce. He guided his metal behemoth over to Cody’s position. Examining, it was pretty superficial damage. He activated his repair module and knelt next to the area in the back of Cody’s mecha. In moments, the repair was finished. “There!”
“Thanks,” answered Cody. “Let’s move on…”
When the air cleared, the three moved in. They switched on search lights.
Once inside a ways, they came to the parts more intact. The damage was extensive. Readings showed toxic gas and some radiation. The dead were strewn about, but so were enemy Zentraedi battlepods and even some infantry. It was a mess. The three surveyed the destruction silently as they passed.
Once deeper, Cody was directed by his on-screen nav to a service elevator. The three removed the doors by force and made a controlled descent through the empty shaft to the bottom.
The three made it to the control room. It was not only intact, but emergency power was still on. “This is good,” remarked Lt. Tisch. “We should have all the data.” Quickly, he recovered the components and extracted the transcript recorder. “I’m going to extract the data now and transmit to you both so we have extra copies.”
Soon, it was done.

~the twist~
Cody had scarcely turned to lead the others out, when Jeff spotted movement. “Battlepods! It’s a trap!”
Suddenly, laser fire lit up the room and explosions blasted a nearby tank of gas. Fire spread everywhere. “Lieutenant?!” asked Bryce.
“Open fire, gentlemen,” came the answer, a blatant defiance of their explicit orders.
Cody brought his mecha into a run to take cover behind a service vehicle. Crouching, he let out a few loud bursts from his gun pod. One of the Zentraedi stepped out of the smoke, making a clear shot for the Vermillion pilot. Armor-piercing rounds reduced the enemy mecha to ruin.
Likewise, Jeff Pardo found cover, and disabled another.
Seeing that they were trapped, and eager to prove himself in battle, Bryce used thrusters to cover the distance, jumping right amid the firefight. Laser fire and friendly fire both narrowly missed him. He stood before the last hostile, taking it out at point blank range. Behind their cover, he could see three more coming. He stepped his mecha out into full view and opened fire. All three battlepods were smoking ruins. He continued his fire and blasted through one of the bulkheads, finding an alternate exit.
“C'mon!” he said to the others. “So we’re not trapped where they want us!”
The others followed after.
“Lieutenant!” called Jeff as they thrusted upward through an auxiliary conduit. “Drones!”
From behind, small unmanned reconnaissance drones flew after the three, recording their whereabouts.
“Okay,” Tisch answer. “There’s a conduit nearby that runs underground to an adjacent facility. Let’s loose them and hide our trail.”
Bryce slowed to a hover. “I’ll get them.”
He opened fire, filling the conduit with bright tracers. Several of the things were destroyed, but several evaded, taking side passages.
“There’s too many!”
“We’ll have to block off access,” relied Tisch.
Together, they found a fuel cell. They set a small charge while Bryce held the passage behind them
After a bright fiery explosion, a main beam collapsed and the way was shut behind them. “Hopefully we can get out of here,” Jeff commented.
“Come on!”
Cody led through a narrow way underground. In some places, they had to stop and manually remove obstructions.
Once through, the way opened to a subterranean hangar bay that was largely intact.
“Okay. Topside, boys,” said Tisch.
The three converted to guardian mode and rocketed upward and out. There were no sign of the battlepods.
“Over there, Lieutenant,” said Bryce.
To the southwest in the direction of the main building, a large group of battlepods formed up in a ring, waiting for them to emerge.
“Damn, that’s a huge battalion!” remarked Tisch. “Alright, let’s fly low at best speed below their radar and climb to escape velocity later.”
The three flew away unnoticed and unmolested, seeing no more Zentraedi hostiles.

Back at the ARMD-7, the three pilots congregated with Major Albright. All pictures and video from the fighters were offloaded, including the records from Port Justice for analysis.
“A good job, gentlemen,” the Major said with a salute. “You’ve done well, and the General may award you all medals for this effort. Any lesser pilots would not have returned.
“Although you didn’t strictly adhere to your orders, under the circumstances, I see no other option you could have exercised.
“Our analysts have confirmed that a Zentraedi destroyer-class cruiser was hiding in the DGZ-6 asteroid field. Reinforcements are coming to rendezvous with us as we speak. Although the Admiral has raised the alert level, earth forces can now act with more confidence and authority given the data you’ve brought back.
“Although I would be happy to send you off for shore leave, stay on alert. At least get yourselves a well deserved drink!”
Posted by Rory Bracebuckle at 8:12 AM