Okay! It's been a while. Lots has happened, and both my time and attention are divided (among non-gaming projects, and far too many solo games!). In any case, it's enjoyable to return to Mitra's campaign.

With some questions answered last time here, and a new set of complications (the need to find the mask, the mask now in possession of one mind-controlled Stordfast, the petty-thief), Mitra's next stage motivation is clear: do some investigative work to find out what happened. Sounds like some Rory's Story Cubes, "Clues" MIX set is in order to help us along!

On top of all of this, a horde of devils and hobgoblins from Dragonspear are threatening the region. Daurauvyn Redbeard, the swordsman Mitra rescued near the Moor, also has his mission: warn the people of the Sword Coast. Mitra as of yet doesn't want Redbeard to know about the mask due to its evil background and potentially evil purpose (which gives her much inner turmoil). How much does she really know about the relic? We may find out... 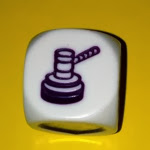 A gavel? Okay, that could mean justice, wrongful indictment, or possibly even the authorities.

...unable to think clearly or plan her next move. Unconscious of the fact, she still had her blade in hand. Redbeard approached her and tried to calm her once again, and barely saw a gang of peacekeepers around the corner just beyond the square.

Soubar was not a place of worthy justice, a sprawling city with great thinkers and art. Instead, it was a backwoods sort of mining town, a last stopover between perilous leagues. As such, the local authorities were little better than the lowly villainous scum that picked one's pocket.

Three men wearing a sort of sash around their waists marking them as the local militia spied the two, and especially honed in on Mitra and her naked steel. It seemed that the group was bored and in need of some kind of sport, or perhaps the scared woman she had approached directed them to her location with warnings of possible trouble.

In any case, the three stalked over to the pair. By this time Mitra had had the sense to lower her steel, though she did not replace it in her scabbard just yet.

It was then that the stableboy wandered out into the street, still holding his head with a the rag that was now spotted with blood.

The ruffians' eyes widened, and stout cudgels were wielded.

Mitra rolled her eyes. "Put away your weapons," she said in a low tone. "This is not what it appears, just ask the boy."

The three had fanned around the two at this point. Daurauvyn was still unarmed and still wounded. However, his hands were planted at his hips and it looked as though he could handle himself despite the disadvantage.

"Listen!" she repeated. "I've been robbed! My money was taken, along with my horse. This boy can confirm about the assailant..."

Does she convince them to stand down? Yes, and...

"Goblin?" repeated the leader. "That could be none other than Kwizzel and Stordfast."

"Aye! Only one vagabond goblin in these parts. He's the only friend of a cutpurse that haunts these areas."

"Do you know where I might find these two?"

"No!" said Mitra quickly. Her mind spun with implications of her next move. If there was a way she could split from Redbeard, all the better. She desired no extra baggage during her journey if she was no longer needed for the sake of life or death. She spoke virtually as she thought.

"Daurauvyn," she continued, turning to Redbeard. "Go with these men and help them spread the news about the looming danger from the north. I'll go after these two thieves. I don't want to scare them off."

Does she convince them of this plan? Yes, but...

"I don't like this idea," the old captain responded, again putting a hand on her arm. "It could be dangerous."

"I can take care of myself!" she snapped, collecting her arm with a quick maneuver. "It will go bad for these folk if they are taken unaware by hordes of bloodthirsty enemies. There's little time...go!"

Next, she turned to head to...

...where the militia indicated Stordfast's haunt was thought to be. She stormed down the street toward the ramshackle holdings that made up the old warehouses of Soubar. Her sword was back in its scabbard for now, but she nervously fidgeted with the pommel as she sped forward.

Suddenly, she heard voices along a less populated street from around the corner. She slowed and listened.

"What have we discovered here?" said a man in a lowbrow tone. This was followed by a nervous nicker.

Mitra turned the corner to see her black charger standing nervously in the middle of a muddy street, reins dragging on the ground. Approaching him were two men of apparently seedy quality by their garb. Hands were outstretched to entice the beast closer.

"That's my horse!" called Mitra, her voice yet full of rage from the misfortunes that had befallen her.

"Says who?" the other man challenged.

"Says I!" she replied, throwing her cloak over one shoulder to reveal her sword hilt. "Care to discuss this further?"

The two looked at one another uneasily, but were apparently unconvinced. Mitra evaluated them with a look from head to toe. They were armed only with daggers, which they had not yet drawn. She sighed. This is what I have to deal with! They are no different than the thick-skulled bravos in my old mercenary company, she thought. She stalked forward like a lioness.

She pushed through them roughly, watching through the corner of her eye whether the two had the balls to escalate the game.

Do they draw weapons on her? DoF: 6

The two decided on the wiser course, much to Mitra's surprise. They nudged one another and moved off, losing their fight. The warrioress allowed Umbril to nuzzle her affectionately.

"What happened, old boy?" she asked, stroking his snout. "Where have you been? What have you seen?"

Does she get Umbril to lead her back? No, and...

When ready, she leapt upon the horse's back and clicked to urge him forward toward the warehouses. Much to her chagrin, Umbril turned away from the old warehouses and headed back to the Water Hole. Mitra checked him, but Umbril whinnied and shook his head against her control. Despite what she tried and all her horsemanship, she could not turn him around.

Sighing, she had to find some place board the horse until her business was finished, then collect him.

Does she have enough to pay a few pennies? No, but...
Her purse strings were cut. She had not a penny to her name. However, her belt buckle was adorned with crystals. Perhaps someone would accept it as collateral until she could recover some money. She turned and headed back to the busier areas to stable Umbril and continue on her way.
Does she find a suitable place closer than ‘The Water Hole?’ DoF: 5
Before the Water Hole, she found another establishment with stabling for its patrons. A gangly old man was the hostler. "My good man," Mitra called as she unbuckled her belt. "Be a kind one and watch my horse for some time...a few hours at most. If I don't return, the buckle and horse are yours."
Does she convince him? Yes...
In moments, Mitra returned to the street along which she found her horse.
Are Umbril's tracks easy to follow? DoF: 4
Soubar was a muddy, filthy excuse for civilization. However, it had one advantage at the moment. She could still make out Umbril's path. The warehouse district was less traversed in the morning, but it was still difficult to discern them among countless others. Still, they were the freshest.
She hadn't far to go before they turned into a most decrepit building huddled between two better ones. The cladding of the building was loose and warped, and it appeared the old building might come caving in on itself at any moment.
There were none about. Mitra drew her blade again and ran in a low crouch to the entrance. Back to the wall and peering cautiously into a black gap where the door was supposed to meet the jamb. There was no movement within.
With a sudden movement, she leapt out and kicked in the door. She easily broke within and entered, both hands on her sword and glancing quickly at the darkened corners of the room. A group of noisy crows took to flight, but there seemed to be no other movement.
It was evident that this was someone's home, at least recently. Someone had made bedding with old rushes, and a table was surrounded by two old stools. There was refuse everywhere. That's when she noticed the glint of coins and a crumpled body.
Darting quickly over the body, she saw the goblin. He was unmoving. Checking, there was no sign of breath. The ugly thing's tongue lolled out. Someone had strangled the thing. About him were a number of coins...just about the exact sum Mitra had carried with her. She picked them up and inspected further. There was no sign of her mask or the cloth in which it was wrapped. There were no other items that might belong to another, but there were clearly two beds, and two stools. An idea began to fill her mind that this Stordfast fellow had killed Kwizzle and absconded with the mask.
Are there clear fresh tracks of someone leaving the building? DoF: 1
Quickly, she exited and examined the muddy ground again for more tracks. Someone had taken care to either tread with stealth, or left by another way. Cursing, she returned within. Finding a lantern and some oil, she lit it and had a better look. If there was any clue to be found, it was perhaps the only opportunity to find her prey.
Stordfast & Kwizzle's Abode
Descriptors: A Virtual Pigsty, Large, Dimly Lit
Does she find any relevant clues? No, and...
She began tearing the place apart. Rats scurried from dark corners and birds cawed noisily and circled. She found nothing that might provide any identification, purpose, or direction. In her fury, she knocked down a precariously placed beam meant to keep one part of the roof from collapsing. Dust and debris filtered down and covered the only thing that might have aided her — an amulet set with a rendering of a woman, who bore an astonishing resemblance to the young man. Underneath the picture was an inscription in Alzhedo, the Calashite tongue, professing a mother's love for her son. It was the only thing Stordfast had of his real mother whom he remembered little. Ironically, it was one of his most cherished possessions that somehow he had left behind...or perhaps it was the madness of the mask that drove out the need for it. In any case, it was now buried.
More unfortunate turns for Mitra! Next chapter will detail her search for the young man with perhaps a cut scene to find out where he went and build some purpose behind his actions. Stay tuned!
Posted by Rory Bracebuckle at 11:39 AM