Threat from the Steppes 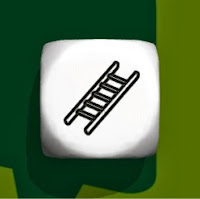 What can I say? I rolled a ladder… Anywho, here’s more continuing adventures of Mitra in “Return of the Shattered Mail”. This one features plenty of botched rolls. I’m using FU straight out of the box, so there are lots of single-die rolls, and luck has largely been on the negative side. But that’s also led to many interesting complications! Look here for more info about our mighty heroine and her stats. For notes about the ruleset I'm using and the particularities of this campaign, look here. For the next part in Mitra's exciting adventures, read on...

The road was a hazardous place, and Mitra of Damara had avoided numerous obstacles and perils over tendays as she navigated the Western Heartlands, including bandits and worse. This she accomplished through wits, obfuscation, and the sword. Moreover, she was a lone woman, making the long journey all the more perilous. This did not daunt her. She was possessed of an unbreakable and rebellious spirit.

The Thunder Pass near the dangerous Stonelands did not stay her. The dangers of the Sunrise Mountains west of Cormyr and its evil denizens did not waylay her. Through roads long and ferries along twisting shining rivers, she passed at last through Iriaebor, Scornubel, and Soubar, entering the west. There, her course might take her further to Baldur’s Gate and the Sword Coast for a waterborne route to points further north. However, she opted to turn north with her sole traveling companion, Umbril, which would take them by even more dangerous and haunted sites through forest and moor…all the while with their secret cargo wrapped in soft cloth inside a bag. 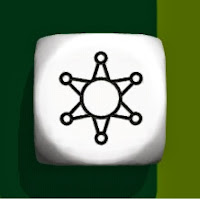 “This town ain’t big enough fer the two of us!” A ranger? A marshal? Some authority warns of something not good. Sounds like another cube is needed to know what… 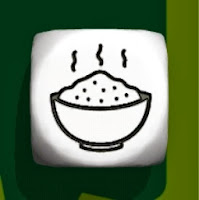 …and I get a steaming bowl of oatmeal! Okay, a famished and wounded survivor of some conflict. Who’s out here? Orcs?

…Mitra crossed the Winding Water and skirted the western edge of the High Moor, a barren and desolate place of mournful sorrow. She stopped within site of the high steppe land, but not too close. Too many evils were said to haunt that flat waste, waylaying hapless travelers.

She dismounted and prepared her bed for the night at the only copse of vegetation for many miles. She dared not light a fire. Even before she laid down, she thought she heard something faint and distant. Looking around, she spied a figure in the twilight making its way in her direction from the north. It made rather clumsy ambling motions, and immediately, fears of the living dead filled her mind.

Quickly, she gathered her things in case she had to make a hasty retreat. However, it was not so. It was a man — weary with exhaustion and possibly wounded. As he approached, his lips formed the words for “help”, but they could not be uttered. The man collapsed in a heap several dozen yards away.

Immediately Mitra rushed to the figure. She turned the man over. He was beyond his middling years. A tangle of long orange and gray hair crossed his sweaty face and blood was caked on his tenday-long growth of silver facial hair. His face was cracked and hardened by weather and lines of care, but the warrioress could tell little by appearance from what land he might hail. He had a strong frame and long but toned muscles on his limbs. He wore a ruined shirt of mail.

Quickly, Mitra put her waterskin to his lips and let the man cool parched lips. He sputtered and came to. “Sa, sa, save us!” he said in a weak but crazed tone. “My men…ruin…all!”

“Quiet yourself, man,” she responded sternly. “And drink!”

In good time, the man had slaked what thirst he could, and then chewed at some crusty bread she gave him with a voracious appetite.

What is he like?
pushing over wall, globe, lifting dumbbells

As he ate, Mitra scrutinized him further. The garb he wore, though tattered and soiled, might have been that of an officer in some sort of regiment. He had no weapon except for an empty baldric.

Does she recognize his colors? Yes, and…

She then noted the sigil of Waterdeep etched on his greaves with a blue and red stripe below that, the colors of the Stewards of the Old Road, a mercenary unit that patrolled the dangerous road near the High Moor. Mitra had known many of their number during her association with the Black Dragons. In large, most of the Stewards were stalwart, trustworthy, and capable men.

She waited for the man to regain his wits and satisfy his immediate urges. Then she said, “You are far from the Way Inn.”

The man met her gaze, shocked that she might know his base of operations. “True,” he answered cautiously. “Thank you for your aid. I owe a debt to you for your kindness.”

“You need a healer,” she commented.

“I’ve suffered many worse hurts during winters past,” he said, ignoring the still open gash that darkened his tunic under his shirt of mail. “Redbeard,” he introduced, extending a leathery muscled hand. “Dauravyn Redbeard.”

The warrioress clasped forearms with him. “The famous Redbeard and proprietor of the Way Inn?”

“Well met. I am Mitra of Damara,” she reciprocated. “What befell you?”

“Hordes of Dragonspear,” the man replied, shuddering at the utterance of that bastion’s name.

Then he told how the numbers of devil-led hobgoblins on the road had grown beyond a nuisance to become a threat to the entire coast. Lord Piergeiron of Waterdeep had sent a large contingent of reinforcements to garrison the inn and clear the roads. A great battle was met in the north, and hundreds on both sides perished.

“…But their numbers were too great,” said Redbeard. His hardened mask of stoicism failed and tears streamed from his eyes. “All the men were decimated!”

Mitra looked upon him with compassion, empathizing what he now went through. She too had led men into battle and suffered losses, some terrible. Although the men under her banner were villains and scoundrels for the most part — due to which she could no longer abide their company — it was still beyond words to loose young men. It was said that there was no immorality among the dying.

“And the roads?” she asked after silence.

“Overrun. A great army is marching to overtake settlements north and south of the Moor. It could lay siege to a small city. There can be no safe passage north along the Trade Way.”

“Then we must travel west to a safe port and go north by ship.”

The man nodded after some thought. “Through Baldur’s Gate I might have the speediest option to send warning to all four directions. If we go first to Soubar, I might find a steed and thus move quicker.”

Mitra thought quickly. She could not abandon the wounded swordsman, but thought of her immediate task in delivering the accursed golden mask clouded her mind. She could, of course, offer to speed ahead alone to get word to Baldur’s Gate, but to abandon him went against every fiber of her being — and she wished not to do anything hasty or illogical for fear that he might pry too much about her own quest. She had no immediate plausible answer yet to that question, other than, my business is my own.

With only a short pause, she agreed. “Let us make haste to Soubar and there find you a swift horse. For now, ride Umbril, my black charger.”

“Again, you have my thanks…” 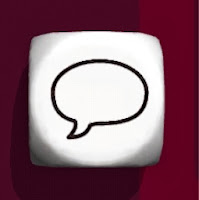 …the two forded the Winding Water and by dawn came upon the small ramshackle and lawless town of Soubar. Although the wearying journey was thankfully uneventful, it was harrowing on Redbeard, who passed in and out of consciousness from loss of blood. In short order, they got in touch with a breeder with a stockade just outside the southern border of town.

Does Mitra find a healer? No…
Can she provide some aid to him? No…
Does he stabilize? DoF: 6
Can they afford a horse? No, and…
☑Robbed

Before heading to the breeder, one Silas Greenoak, Mitra inquired about a healer despite Dauravyn’s protests. It was pointless in any case, since none of the vagabonds with whom they crossed paths could point to any. They stopped at a local watering hole named, ironically, The Water Hole. There they ordered some ale, bread, and sausage and Mitra did the best she could cleaning Redbeard’s wound. She could do little, but again, the food and drink seemed to do wonders on its own to the stoic Dauravyn.

Not wanting to waste time, the two left hastily to wander down to Greenoak’s paddock. However, when Mitra went to collect Umbril from the stableboy, she found the place oddly empty. To her sudden shock and horror, each stall was empty.

A moan sounded from one corner. The stableboy was lying in a bed of rushes with a nasty red welt shining the skin above his left eye.

Mitra knelt down and shook the boy awake. “Come now, lad. What happened?”

She propped the boy up against a beam and slapped his ruddy cheeks. Soon, his eyes popped open.

My first roll using the MIX set, “Enchanted”. How fortuitous!

…but managed to regain some of his wits. “Goblin…” he sighed, clutching his head.

Mitra and Dauravyn looked in shock at one another. The warrioress couldn’t believe what she was hearing. “Did you say, ‘goblin’?”

“Goblin,” confirmed Redbeard who was leaning over Mitra’s shoulder.

“Here?” asked Mitra. “In the middle of Soubar? During the day?”

It was useless getting further info from the boy. She fetched some water with a ladle for the boy and prepared a compress with some rags laying nearby.

Mitra was furious and frustrated. They needed to get fast steeds to Baldur’s Gate; moreover, she had been through thick and thin with Umbril. She couldn’t leave Soubar without him, even if an entire horde of devils and orcs from Dragonspear was on their tail. To make matters worse, she reached down and realized that her purse strings were cut! They had not enough money to buy a loaf of bread, let alone an entire horse.

Suddenly with panic, she felt for the bag hanging from her hip that contained her secret payload. It was lightened and slit in the bottom.

Dauravyn looked at her quizzically.

“I’ve been robbed!” she cried. She drew her sword and walked out into the streets. Quickly, Redbeard followed.

Does she find any clues? No, and…

Looking around, there was no sign of anyone, man- nor goblin-sized, leading any dark horse away. Mitra doubted that Umbril would suffer the touch and stench of goblin. She approached one wary-eyed woman and her skittish daughter to inquire. Mitra’s threatening demeanor and brandished sword sent them fleeing, however. Putting away her blade, she asked other bystanders to no effect.

“Did no one see the thieves that robbed me?!” she growled to no one in particular.

Redbeard put a hand on her shoulder. However, a hot glare told the pioneering innkeeper she wished no touch. “He could not have gone far,” he said. Then, reassuringly he added, “We will find him.”


Well, now Mitra is in a pickle! What will she do next? I will jump ahead and perhaps have another NPC cut scene to learn more about the villainous culprits behind the theft. What will they do with the golden death mask? Stay tuned!
Posted by Rory Bracebuckle at 6:44 PM