Doria in the Savage North, part 1

To create more interest in my new Perilous Intersections solo engine, here is an introductory adventure using those new rules. The action is set in the Savage North area of the Forgotten Realms. FU will be my rpg system of choice

FU Refresh: 2
Description: Dark-haired and pale-skinned, Doria is an attractive yet imposing figure. She hails from the Ride, her home their burned and her people slain or enslaved by the evil Zhentarim. She found her way by virtue of the sword. She has served as bodyguard, mercenary, and adventurer. She wanders, seeking to bring down the sorcerers who have enslaved and destroyed her people.
Conditions: None
Special: as a special charm ability, spending 1 FU point and making a Beat the Odds roll allows Doria to summon a flock of ravens upon need to confuse or bewilder.

Doria, seeking revenge on those Zhentarim she remembers were a part of the raid on her village, she seeks to track them one by one.


This is the first stage of the PI system. In it, scene events are interpreted as to push on the direction of the PC's main thrust. Once two of the Big Questions are answered (Who? What? Why? How?), the system moves into the next stage of play, wherein the antagonistic aggression begins to target the PC directly.

One: Doria in Luskan


Setup: Doria arrives in Luskan where she has heard that a pocket of Zhentarim agents are operating


Doria wanders into the first dive she sees, the Lazy Albatross and begins questioning in a most unsophisticated way. She’s not against bashing some heads to get some quick answers.

The Lazy Albatross
Concept: Seedy Bar Near the Docks of Luskan

Intersection: taking the idea to mean friendly or familiar, Doria is shocked to see one of her kin from her burned village — one she was certain was dead or captured, now in his cups, toothless at the bar. Jermal has friends with him — friends with a different mien than she might expect from low-life Zhentish thugs. (Conflict)

Using her willfulness, Doria tries to get sense out of the man, now a broken freeman with only a shred of sanity. Due to her forcefulness, she has no luck, and attracts Jermal’s nearby friends, who put hands to their sword hilts to protect the aging savage.

Does Doria defend herself? Yes, but…

A fierce fight breaks out, sending patrons scurrying. Doria raises the hellcat within her and beats the three peculiarly dressed fellows back. However, one escapes out the back with Jermal.

Does she chase them down? Yes, but…

Quick as a cat, Doria chases the man hauling Jermal out by his cuff. She cuts the distance, but the two she fought recovered and have her surrounded.

Does Doria defeat the men? Yes, and…

With savage ferocity swinging her sword, and a cunning backhanded flick using one of her dirks, she cuts them down one by one, and rescues Jermal.

She finds and recognizes a pin in the folds of one of the men’s cloaks. A Harper pin! What were they doing in Luskan — and with Jermal, who she thought was slain or enslaved years ago?

Two: Doria Holes Up with Jermal

Setup: Doria rents a cheap room and tries to rehabilitate Jermal and get answers


Doria finds a quiet decrepit hostelry near a temple to Talos named The Grand Chalet which was anything but. There, she tries to nurse Jermal back to coherence so she can ask about the local Zhentarim. She knows there must be a connection between them, the Harpers, and Jermal’s seemingly random appearance.

Seed: Fountain
Intersection: Seeing the fountain as a spouting forth of endless stuff, this means that Jermal comes to the next day, and begins talking — a lot! Only, none of it seems coherent in any sense. It is a stream of babble, about esoteric stuff. (Revelation)

Does she get him to talk sense? No, and…
Doria tries to calm him, but in her vengeful zeal, he only gets enraged and streaks out into the streets like a madman.

Story Probe: Did Jermal speak of some esoteric artifact? D6+0 = 4. No


Something Different: drawing a feathered arrow and intersecting against the Story Probe, Jermal was spouting on about some looming war.

Scene Close: An unreliable and sketchy What answered; How is very sketchy, but seems to involve Jermal; DL increases

By the end of our session, we get this for the first two scenes: 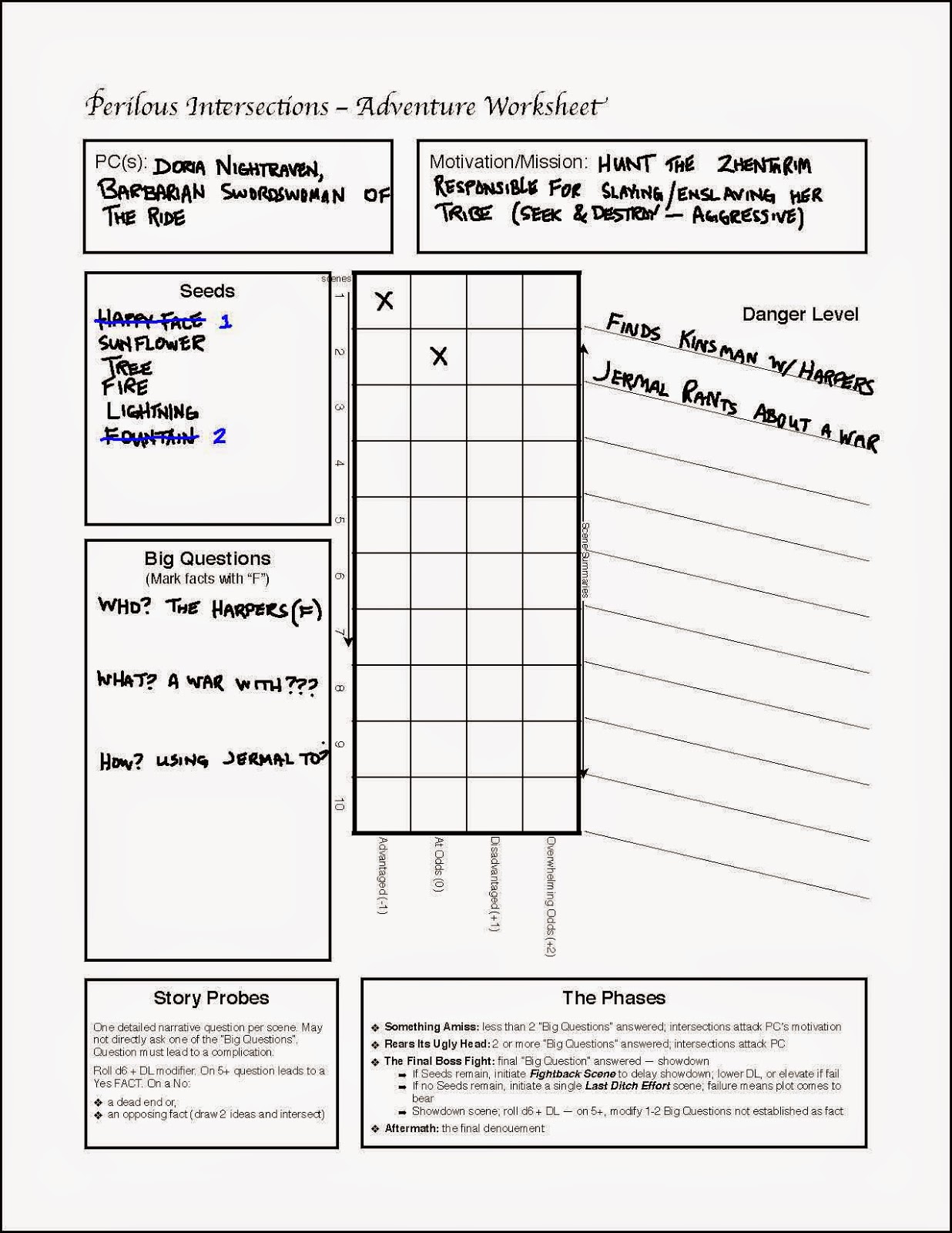 Posted by Rory Bracebuckle at 2:57 PM