...continued from before, this is part 2 of “Return of the Shattered Mail”. As promised, it is an NPC cut scene derived from freely interpreting a random set of nine Story Cubes. This chapter will be about building some NPCs and plot. I have rolled nine Cubes and arranged to taste to accomplish this free story-telling segment. This will help build a reason for Mitra to raid the king’s tomb, building some intrigue. I can’t wait until my MIX set arrives this week! In any case, here it is: 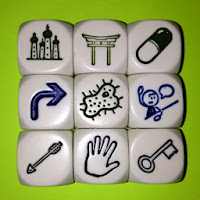 Luskan. The City of Sails. Marked by the immense four-spired Host Tower of the Arcane, the northern city was the last hub of trade before the forbidding north sealed the landscape with inhospitable cold and deadly ice.

At the north gate of the city, a lone figure was challenged by a guard. “My business is my own,” said a slight cloaked figure. There was something innocuous about the figure — something about his garb or small stature that one might easily overlook in a crowd — yet when one inspected the plain-faced personage under the gray cloak for any duration, the was a not so innocent mien. Dark guarded eyes stared back at the tongue-tied guard for a moment before speaking. There was something underneath the exterior that might have been equally capable of kindness or great maliciousness.

The guard was at a loss, and only stepped back with an apologetic nod to let the stranger pass. Continue on his way the man did without a look over his shoulder — that is until he had passed through the trading coaster yards of the Red Dragon, turned down the Street of Sails, and through areas of low repute. Only then did the man duck under the darkened eave of a brothel to study the street behind him. The coast clear, he changed his course through narrower alleys until he came to a forgotten cul de sac of refuse and rain gutters waiting and watching.

After some time did another figure appear from an adjacent alley. This one was large, bristly, and unclean, wearing a brown frock that might have been that of a brother of Ilmater. He was a hulk of a man with a more than ample gut and detestable visage that attested to gluttonous appetites both culinary and amoral. The swagger of his step and the contemptible smile on his piglike face clearly illustrated the man’s arrogance and dislike of his counterpart.

“And no doubt you were early, Aseneth,” the larger said with a stifled yawn.

“Quiet that fat tongue!” hissed the short one. “You are a fool, Hacarthor.”

The fat man’s eyes narrowed and his bored expression fled him, replaced by an intense glare of warning. “Be careful! Remember to whom you are addressing…”

“I am reminded almost daily that you are a high brother of the arcane host, master Aengrilor,” said Aseneth with barely veiled derision. “What news do you have? Is she still on the trail?”

The wizard, Hacarthor Aengrilor did not answer at first, relishing his contact’s discomfort at any prolonged meeting. “Patience, inquisitive one. Your master has no reason to be displeased…”

“What does that mean?” asked Aseneth impatiently. “She has the mask?”

“All is still according to plan,” purred the wizard.

“The Damaran still must cross dangerous lands to bring it here. She could easily be harassed or robbed over those many leagues. At this point, the risks are high — it is the last piece to a lifetime of work.”

“What difference does it make to you?”

Aseneth did not answer. He recognized the bait Hacarthor laid. Although a skilled assassin, Aseneth was little more than hired help — a skilled servant. However, he was notorious and successful enough that he could have accepted far more lucrative options for himself. Hacarthor was both testing his loyalty to his master, and simultaneously reminded him that he could do better. The assassin sneered in contempt realizing that there were few secrets from an information broker with magical means, who likely knew the details of Aseneth’s contract terms. In truth, he was tired of being his master’s errand boy; yet, there were still future opportunities to be explored.

“Relax,” Hacarthor continued, enjoying teasing the little rat before him. “If impending danger approaches the mercenary, you will be informed.”

Aseneth was not so sure. “Then be vigilant — even if it means no gambling, fewer wenches, and less swill.”

The assassin thought Hacarthor was being facetious for humor, but he saw that he had actually touched a sensitive spot. He dismissed it and turned to leave. “Keep to your crystal ball!” he shouted.

That was a fun free association. It was just enough detail to build some interesting potential antagonists, and introduce that some sort of plot is afoot, but yet not enough to really let me know what's going on. My interest is piqued. Next chapter, I think, will be devoted to the travel and overcoming some obstacle to get to the northwest of the Realms still with the mask in possession. I still don't know why she was tasked to take the item. A simple contract? Sounds more like either blackmail or some other motivation.
Posted by Rory Bracebuckle at 11:25 AM